STE. GENEVIEVE, Mo.  —  Engaged in a tough conference battle and down two key scorers, senior Clayton Drury put his team on his shoulders in the final eight minutes to help Valle Catholic hold off a resilient Kingston squad 70-60 in small-schools divisional action of the Mineral Area Activities Association at VCHS last Tuesday (Jan. 17). 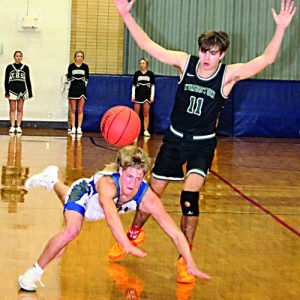 Drury scored a game- and career-high 34 points with six crucial 3-pointers as the Warriors survived 10 lead changes in the second half to stay atop the league standings in the win.

Valle (9-5, 2-0 MAAA), which won for the second time in three games, shot 42% from its own floor and addressed its free throw problems by making 23 of 31 freebies this night.w

The seesaw matchup was tight all the way through. It was 15-15 after one quarter after the Cougars’ 10-0 run, but Valle led 28-27 at intermission and 44-40 heading into the final frame despite the back-and-forth in scoring.

The Warriors made it 47-40 just seconds into the fourth quarter after C. Drury hit a 3-pointer, but Kingston used a 17-6 run from there for another lead change, 57-53.

Valle answered with a 17-3 run of its own after that to thwart the Cougars’ rally.

Nick Oliver had three points with a trey and three rebounds. Jackson Fowler had five rebounds.

Valle was without top scorer Chase Fallert and top-rebounder/key scorer Harry Oliver both due to recent ankle injuries.

The Cougars (9-7, 1-2), who shot 52% overall, now have lost two straight. They also had a starter injured prior to this game in Corey Kemper.

But Cody Yates had his own show with a near double-double. He scored 27 points, 16 in the first half, on 11 of 20 shooting, grabbed eight rebounds and had four assists.

Collin Sumpter had 13 points on 6 of 10 shooting and had seven rebounds. Seth Politte had five assists. The Cougars were 12 for 16 from the charity stripe.

Drury, a senior, was the only player to score double figures as Chase Fallert went down with an ankle injury. The Warriors already were down senior Harry Oliver, who hurt his ankle the previous week against Lovejoy, Ill.

Valley also was short-staffed as well.

The Vikings (8-7, 0-2) Chayse DeClue and Westin Thompson both had nine points. They were playing without K.J. Tiefenauer and Kaiden Dickey already before Colby Maxwell also went down with an ankle injury.

The game was originally scheduled for Friday, Jan. 6, but a scheduling conflict moved the game back 10 days.

The Warriors return to action this week after several members of the VCHS student body went on the Pro Life trip to Washington, D.C.

The event took on a different feeling this time after the U.S. Supreme Court overturned last June it’s 1973 Roe vs. Wade decision that made abortion legal for nearly 50 years. With the overturn, that federal protection for abortion is no longer and now is state-by-state whether it’s illegal or not. Missouri chose to ban abortion with few exceptions.