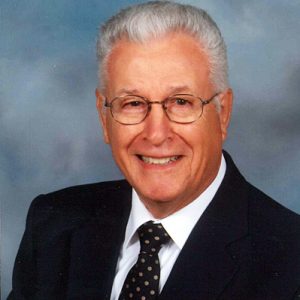 Herman Francis Baechle was born on May 30, 1929 to Peter August and Anna Genevieve (née Kraenzle) Baechle in Bloomsdale, MO.  After a recent battle with leukemia, he died on January 18, 2023 at the age of 93 in his home surrounded by family.

Herman received his primary education at Valle Parochial School.  In the fall of 1943, he entered Ste. Genevieve High School where his father was a teacher.  He played both basketball and football, serving as a captain his senior year, was active in student government, and was his class president during his sophomore, junior, and senior years.  Upon graduating from high school, he attended the University of Missouri in Columbia, MO, from 1947-52, ultimately obtaining a B.S. in Agriculture.  While at “Mizzou,” he played varsity football for four years, attending and playing in the Gator Bowl twice, and was a member of the Air ROTC Program.

Upon graduation he received a commission in the United States Air Force as a Second Lieutenant.  After a brief time in Sacramento, CA, he was stationed in Thule, Greenland in January of 1953.  In May of the following year he returned to the USA, taking a position with the Kroger Co. and working as a journeyman meat cutter for two years in several stores in Southeastern Missouri, Southern Illinois, and Western Kentucky.  Kroger transferred him to Little Rock, AR, in September 1956 to work as a meat cutter trainer.

In October 1956, Herman met Margaret Mary Kordsmeier of Morrilton, AR, who was working as a registered nurse in Little Rock.  They fell in love and became engaged.  Kroger selected him to attend a one-year Masters Program at Michigan State University in East Lansing, MI.  On Christmas break, he returned to Little Rock, and he and Margaret were united in holy matrimony on December 28, 1957 at Sacred Heart Catholic Church in Morrilton.  In January, the newlyweds returned to Michigan State where Herman completed a Masters degree in Food Herman and Margaret were happily married for over sixty-five years.  During that time, the couple lived in different areas as a result of Herman’s employment with Kroger, making homes in Cleveland, OH, Minneapolis, MN, Peoria, IL, and Dallas, TX.  Along the way, God blessed them with six children.  In June 1975, Herman was transferred to Houston, TX.  He purchased a home in Spring, TX, and it was here that he would live for the rest of his life.  Herman worked for the Kroger Co. until October of 1986 when he accepted early retirement.  His retirement did not last long, however, for in January 1987 he accepted a position with Prefco, serving ultimately as its Vice President of Procurement.  He worked for Prefco for twenty-four years, retiring in January 2011, at the age of eighty-one.

Herman was a man of strong faith and was deeply religious.  His Roman Catholicism permeated every part of his life and made him the man he was.  He was an ideal husband, father, grandfather, cousin, colleague, and friend who lived a life of heroic virtue.  His quiet and daily witness to the Gospel manifested to everyone he met the love of Christ in the most mundane of everyday activities.  While he was not a teacher like his father, everyone who knew Herman would remark about how much they learned from him, both professionally, personally, and morally.  Herman touched the lives of countless people.  He will be truly missed and will continued to be loved.