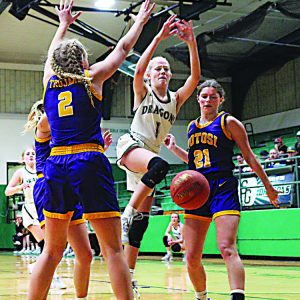 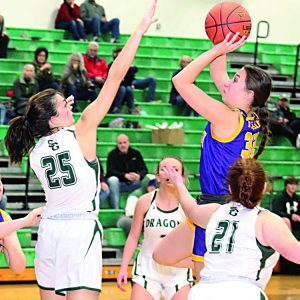 The host gave a valiant effort but were 0-for-10 shooting in the fourth quarter as the Trojans used an 18-1 run that started in the third period of the Mineral Area Activities Association’s large-schools divisional action.

That included 14 straight points in final frame to pull away. It was the second time this season they defeated Ste. Genevieve.

Greminger scored a game- and career-high 12 points with two trifectas, but the Trojans answered with a trio of 10-point performances.

Kayden Huck tied the game at 34-all with 59 seconds left in the third quarter on a steal and layup that resulted in a traditional three-point play, aka an and-1. That was it for the Dragons from there.

But Huck finished with five points and three steals.

The Dragons were 9 for 14 from the free-throw line.

Ste. Genevieve was eliminated by Potosi 49-38 during the consolation semifinals of the Bob Sechrest Jr./Park Hills Central High Christmas Tournament on Dec. 27.