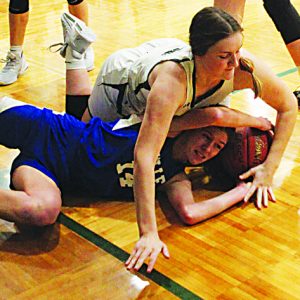 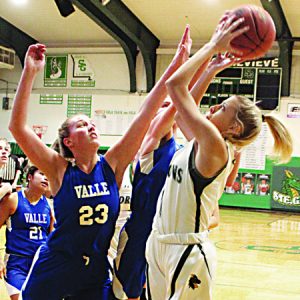 The senior gave the staff-depleted Warriors a heckuva a fit on the Peggy J. Johnson Memorial Gymnasium floor offensively and defensively, just missing a double-double in the process on her way to player of the game.

Byington was the only one in the game to score in double figures with 15 points and a 3-pointer on 7-of-13 shooting, most of those points coming off her nine steals, while she also grabbed five rebounds.

The Warriors did not score a field goal until 4:35 of the second quarter due to the Dragons’ halfcourt pressure. They shot just 28% from the floor and were 3 for 7 from the foul line.

But Valle’s own aggressiveness and willingness to hit the floor made it a slow start for the host as well. The Dragons shot just 30% from the hardwood and were only 2 for 5 from the charity stripe.

The Dragons led 6-1 after one quarter, 14-5 at intermission, but got rolling the third period using a 17-0 run to lead 31-12 heading into the final frame.

Reynolds has no plans to become a Varsity head coach anywhere as she is busy being the longtime AAU girls’ basketball coach in town.

The Valle graduate and current Ste. Geneveive Elementary staff member took the reins for the Dragons this night after head coach Jordanna Walk-Robinson was ejected during their home conference loss to North County the week before.

Robinson had to miss this game per MSHSAA rules, and therefore Reynolds is 1-0 in her Varsity debut.

And so, the Dragons are back above .500 for the moment and have defeated Valle for the second time this season. They beat Valle 49-22 during the third round of the Valle Invitational on Dec. 1.