STE. GENEVIEVE, Mo.  —  This is one the host Dragons will want to forget about as they fell 57-24 to North St. Francis County Thursday (Jan. 12) at the Peggy J. Johnson Memorial Gymnasium to open up large-schools divisional girls’ basketball action of the Mineral Area Activities Association conference. 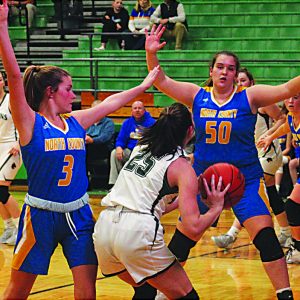 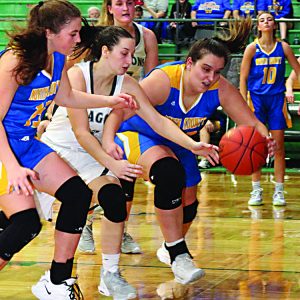 Ste. Genevieve had no answer for senior Paris Larkin, who scored a game- and career-high 32 points for the Bonne Terre-based Raiders (8-5, 1-0 MAAA).

The Dragons (5-5, 0-1) committed 27 turnovers and did not score a field goal for the game’s first 10 minutes and 27 seconds. They trailed 14-1 after one period and 23-1 before Alli Byington hit the team’s first bucket.

They trailed 27-11 at intermission and 41-20 heading into the final quarter.

Dragons’ head coach Jordanna Walk-Robinson was ejected  —  to her surprise  —  after voicing her frustration to her assistant coach Ann Fallert-Reynolds. But the referee took it as complaining to him and gave her two technicals, resulting in the ejection. She will have to miss the “Braggin’ Rights” game with Valle Catholic now. This while her father Jeff Walk, the former Three Rivers Community College women’s basketball coach and former longtime Twin Rivers High girls’ hoops coach, had come to town to watch her coach.

Alli Byington scored a team-high nine points in the middle quarters only. They were just 2 for 11 from the foul line, while the Raiders were 12 for 20 from it.

The Dragons played host to crosstown rival Valle Catholic this past Monday (Jan. 16), and do so without head coach Walk-Robinson. That means assistant coach/longtime local girls’ AAU basketgball coach Ann Fallert-Reynolds will make her Varsity debut as a temporary head coach for that game.

They then host conference foe Potosi on Thursday (Jan. 19) and host Park Hills Central on Monday, Jan. 23. All three games are set for 6 p.m.