Having split the first two meetings with a potential fourth meeting in a few weeks, Hunter scored a game-high 30 points to power the Dragons to a 76-60 victory Friday (Jan. 13)  at NCHS in Bonne Terre during large-schools divisional action of the Mineral Area Activities Association Conference.

Hunter, a senior, countered Lane Wigger’s 25 points as the two combined for six 3-pointers in the shootout. 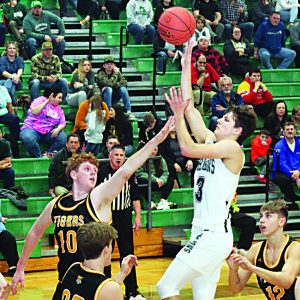 Both teams combined to shoot 40 total free throws, but combined to miss 14 of those freebies.

Despite trailing 29-28 at break time, the Dragons outscored them 48-31 in the second half.

Ste. Genevieve (11-3, 2-0), which committed nine turnovers, remained atop the conference standings with a looming meeting with conference favorite and co-leader Park Hills Central later this week.

Hunter, who sank four treys, scored 19 of his points in the second half, including 11 in the third quarter; he shot 12 for 22 from the floor. The shooting guard also had six rebounds and four assists.

Kaden Flye posted a double-double with 17 points on 7 of 16 shooting and 12 rebounds, plus four assists, two steals and blocked a shot.

Aiden Boyer also had a double-double, adding 10 points on 3 of 10 shooting, 14 rebounds and three assists.

The Raiders’ Andrew Civey had 18 points to help Wigger’s performance. They were 7 for 11 from the charity stripe.

Ste. Genevieve used the middle quarters  —  outscored the Tigers 44-25  —  to pull away against the Ironton-based Tigers as they shot 44% overall, hauled in 33 total rebounds and collected 14 steals and had 18 assists.

Hunter shot 8 of 22 from the hardwood and was 8 of 9 from the charity stripe. He also had six rebounds, three assists and two steals. He provided the assists on Boyer’s 1,000th point. Hunter also scored his 1,000th point back in December.

Boyer just missed a double-double with eight rebounds and also blocked a shot. He was 7 for 10 from the floor, including a 3-pointer.

Boyer is a three-sport standout with football and baseball as well, and is also the Dragons’ three-year starter at quarterback who covers the outfield with ease from centerfield.

Tucker Reed had 13 points on 6 of 7 shooting and had one block.

The Tigers’ Jackson Dement scored 10 of his 20 points in the third quarter. Gage Douglass added 14 points with four 3-pointers. They were 4 of 7 from the foul line.

They then head to Park Hills to face conference rival Central Rebels at 5 p.m. Friday (Jan. 20). Both teams sit atop of the MAAA large-school standings with no conference losses at this time.