With candles flickering, a crisp breeze, the bright moonlight, and the spirit of the holidays in full swing, I was fully captivated by this experience. As a Ste. Genevieve native, I have never experienced anything like this.

As I clenched my pen and paper and zipped up my jacket a bit more, I imagined a simpler time: one where horse-drawn carriages roamed the streets and our lives were not ruled by a tiny computer we carry in our pocket.

As I entered the American Legion with its neon lights and smiling faces, I could feel the sense of community. This was not just a group of people celebrating a yearly holiday. This was the workings of generations of folks that take pride in carrying on the tradition of the La Guignolee.

Prior to this night, the only member from the troupe I was familiar with was Mike Papin, who I first met at my interview for the previous La Guignolee article I had written. Having never seen the La Guignolee perform, I thought I would be surrounded by strangers. Little did I know how wrong I was. These people were not strangers. I saw my mailman, my high school history teacher, my dad’s childhood best friend dressed as a clown, Mary and Joseph, and Santa Claus. They were the same familiar faces I recognized on any given day in my town.

We entered the Valle gym. The night was still young and we had several hours until midnight, but I could already feel something changing within me. No longer was I following a group around for an article. Instead, I felt like I was a part of the experience. This was how I would be ringing in my 2023: with my entire community as I listened to a song that was, literally, foreign to me. But, that did not seem to matter to anyone. We were not here for the mere words. We were here for the experience, the tradition, and the togetherness.

To add to this already entertaining night, put “Elks Lodge Wedding Crashers” on there. Everyone dressed in costumes for the occasion which made it that much more exciting. With all the shenanigans, good cheer, and costumes, I can only describe this as the winter version of a Halloween parade.

With families gathering around to share this tradition with the next generation, the song started out loudly and proud. At the sound of the solo, the room went quiet. By the end of the song, everyone was cheering. As the night progressed, the singing grew thunderous, the musical instruments were played with passion, the claps got more enthusiastic, and the dancing became contagious. The patrons from the restaurants, bars, and local businesses showed full enjoyment for the festive display with their loud roar of applause.

I would have to say that my favorite part of the night was visiting the nursing homes. It was exactly as Mike Papin had described. One of the Care Center residents exclaimed, “I used to know that song!” The residents were singing, swaying to the music, clapping, and being taken back to a time where life was just easier. No longer was pain or age creeping up. Instead, they were young, carefree, and full of life. The world was theirs for the taking, if only until the end of the song.

Thinking back to some seven hours ago whenever I started my journey, I realized that the experience was completely worth it. If I could do it all again, I would be the first person to grab my press pass and notebook. I had now experienced the famous La Guignolee. But, the night was not over. The roaring of the countdown began. “3…2…1…Happy New Year!” The clock struck midnight and the room was filled with cheer, kissing loved ones, and the wish of a brighter future. This is what it is all about. Cheers! 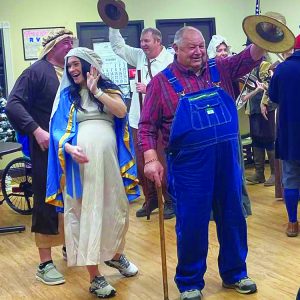