Brown Is Wanted For 5 Felonies, Including Kidnapping, Assault and Armed Criminal Action

STE. GENEVIEVE, Mo.  —  The Ste. Genevieve County Sheriff’s Department is asking for the public’s assistance for the whereabouts of an armed-and-dangerous man  —  Danny Wesley Brown, 60 (pictured)  —  wanted for five different felonies that all allegedly occurred Thursday night (12.28.2022) within the county. The department posted the request on its Facebook page.

Brown, whose last known address is in Perryville, is considered armed and dangerous and is on the run. He is described as a 6-foot-4, 245-pound male with brown eyes and white/gray hair.

The prosecuting attorney has issued a warrant for Brown’s arrest with no bond set. However, his location currently is unknown.

Brown was last seen in a 2016 cherry-red Chevy Suburban (also pictured) with a Missouri license plate reading 3SA J53; and possibly traveling in the St. Louis area as he has family in Alton, Ill.

The charges are as follows … 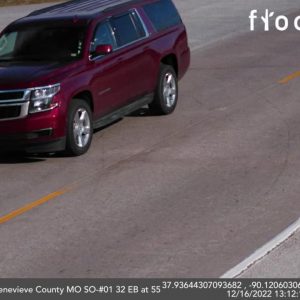 Unlawful use of a weapon, Felony.

Again, Brown is considered armed and dangerous. If you know where he is located, contact the appropriate law enforcement jurisdiction or Central Dispatch at (573) 883-5215.