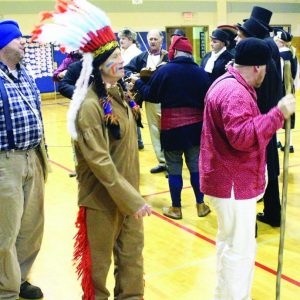 Colorful costumes are part of the fun of La Guignolee.

If the newly placed French street signs, French Heritage Festival, the historical buildings, Fleur-de-Lis flags flying about, and ongoing tradition of the Jour De Fete do not tell you that Ste. Genevieve has an immense French history, the La Guignolee New Year’s Eve custom surely does.

Dating back 250 years, this French-inspired winter tradition started out when poor, male singers would go door to door to sing in costumes for the wealthy. In return, the wealthy would supply the singers with drinks and food. This also provided a great opportunity for the males to be greeted by the daughters of the wealthy.

But, what exactly are they singing? The only French I am familiar with are things I hear from perfume commercials and a pop song that dates back to my elementary school days. After struggling to pronounce the word, I created my own pronunciation guide: la-gi-oh-knee.

The direct translation for the soloist song is:

And all who live with you.

For the first day of the year,

You owe us La Guignolée.

If you have nothing to give,

A chine of meat or so will do.

A chine of meat is not a big thing,

Again, we don’t ask for very much,

Only the oldest daughter of the house.

We will give her lots of good cheer,

And we will surely warm her feet.

Now, we greet you,

And beg you to forgive us please.

If we have acted a little crazy,

We meant it in good fun.

Another time we’ll surely be careful

To know when we must come back here again.

I jumped at the opportunity to interview Mike Papin, soloist and troupe leader, and immerse myself in this beloved Ste. Genevieve tradition.

Seated beside his grandson, Mike told me that he had been in the troupe for 30 years. But, he was no newcomer to being a member of La Guignolee. In fact, this is a long-dated affair for the Papin family.

But, what does that word even mean? Asking Mike this, he stated, “La Guignolee is a fancy term for a singing group.” In the 50s and 60s, more than one La Guignolee group would be seen singing around town.

Mike’s grandpa, Alfred Papin, was a soloist and lead in the troupe. Alfred, who had seven sons all singing in the troupe, was also the only member to have a 45 recording at KSGM. Mike’s inspiration to be a member was of the Papin tradition, listening to his grandpa’s recording as a child, and being taught the solo by his grandpa.

Every year, there are 20-30 members to make up the troupe. Predominately, friends of Mike and the members’ children make up the singing group. Most members get involved because of family ties. The troupe is made up of four lead singers and a circle of singers. This year, Mike’s stepson is singing as a part of the circle. Along with his stepson, Mike hopes that his young grandson carries on the La Guignolee tradition.