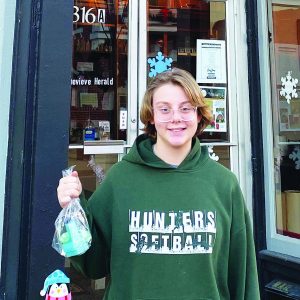 Charlotte Mooney has not only mastered making soap but also pricing, packaging and publicizing it (right).

What started as a Christmas present has developed into a hobby and a cottage industry for one Ste. Genevieve eighth-grader.

Charlotte Mooney, daughter of John and Elaine Mooney, has launched her own homemade soap business.

“A couple of years ago I got a soap-making kit for Christmas from my aunt and I was just experimenting with different things,” Charlotte said. “That’s really how it started. I liked it; I thought it was cool.”

She made an early fan in one of her teachers, Crystal Koenig. Koenig found that the soap does more than cleanse the body

“I gave the soap (spice scent) to her to try it out and she went to a bunch of mountains and hikes and caves over the summer, and she said she didn’t get any mosquito bites the whole time. And she said she could see swarms of mosquitoes around her but she didn’t get bitten once. She told me it was a great mosquito repellent.”

“An amazingly, creative, generous, and sweet student, Charlotte Mooney, gave me this beautifully, marbled, home-made bar of soap for Teacher Appreciation Week last year. She called it Spice,” Koenig said. “A few amazing trips to several states, hiking in the mountains, valleys, and lakes, camping trips, creeks, rivers, gardening every day, and I do not have to worry about mosquitoes at all (anyone with me who did not use her soap did not fair as well).

Like a top chef, Charlotte is not giving away her secret recipe.

A glycerin soap base is used, with different aromas and colors added.

“When you’re done pouring the soap into the molds, you have to spray rubbing alcohol on the top, to get rid of the bubbles that are formed when you’re stirring it.”

It takes 30-45 minutes to make a batch, plus another hour or so for it to cool.

Some of her most popular varieties are the Spice Soap and one she calls Lily of the Valley.

Charlotte has about 20 customers. When she started, she never imagined developing such a network.

She has gotten to tackle the business side of the enterprise this year in Koenig’s gifted class.

“In my gifted class we have independent work time, where you get to choose something you want to study or work on for multiple weeks,” Charlotte said. “She knows about the soap and said, ‘Charlotte you’re going to work on the soap business, right?’ She had me start working on logos and different ways to package it, different scents.”

She also had to research the cost of ingredients, bags to put the soap in and other budgetary items so she could determine a sales price for each bar of soap.

“She had me start working on a budget, to decide which base was the cheapest for soap,” Charlotte said.