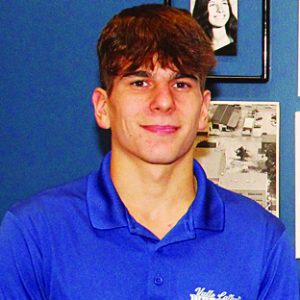 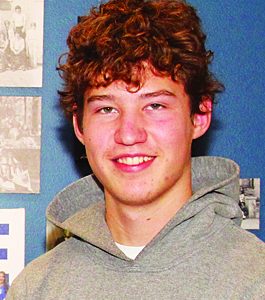 What’s in a name?

For two Valle Catholic classmates, there has been some confusion at times in sharing a name.

The Valle Class of 2023 – not to mention the Warrior cross country team – include both Joseph Flieg and Josef Flieg.

Josef had the franchise on the name locally until Joseph and his family moved from Baton Rouge, La., during seventh grade.

“Normally I’ll have the ‘PH,’” Joseph said, “and he’s stayed just ‘Josef.’ He has the rights to the name since he’s been here longer.”

“I know back in seventh grade, when it was a really big deal that we now had two kids who had the same name, there was a rumor going around that they would start calling us Phineas and Ferb, like the TV show,” Josef said. “But we made sure to shut that one down real fast, before that got out of hand,”

Does it get confusing for friends?

“It definitely does,” mutual friend Peter Roth said, “especially since they both do cross country and track. We all do. On the stats websites, like Momilesplit.com and stuff, none of them have any of their stats on the website because they just can’t keep them straight. They’ve twisted up stats on the websites and the coach will try to fix them and it just gets all jumbled.”

Joseph has also received letters of interest from college cross country coaches, intended for his namesake.

“Especially in the last year or two, we’ve started to get letters from colleges. Josef is a lot better at cross country than I am, and sometimes I’ll get a letter from a college, saying they want me to do cross country for them, and I’ll think, ‘Man, that’s kind of weird.’ Then we recently realized they’d mixed them up, thinking they were sending them to him.”

Adults haven’t always caught onto the “PH” and “F” monikers.

“We would have to explain to our parents which Joseph we were talking about,” mutual friend Matthew Hoog said. “Because, if we say, ‘PH,’ they don’t know who that is. So sometimes when we differentiate them, if they’ve seem them before, we either call them ‘The taller one,’ or ‘the shorter one.’ Every time we talk about them, they have to ask which one.”

“Its always funny when we’re in a big school assembly or something and they call some up for an award and they call ‘Joseph Flieg,’ there’s always that moment of hesitation when they both stand up and look at each other,” Roth said.

“They always have to say ‘Joseph PH Flieg’ or ‘Josef F Flieg,’ so we’ll know who it is,” Josef added.