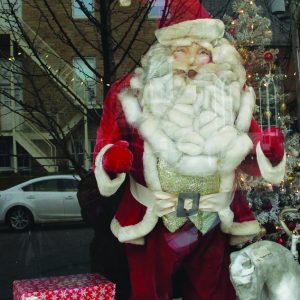 The 67-year-old “Dorlu Santa” is still entertaining residents in the window of the building that formerly housed The Clip Joint at 364 Market Street.

Hearkening back to a simpler time, the Dorlu Santa is again amazing pedestrians.

The mechanical figure, which debuted at the Dorlu Shop on N. Fourth Street in 1955, is again on display in the window of the building that formerly housed The Clip Joint, now owned by the Ste. Genevieve Museum Learning Center (SGCMLC).

The late Walter “Stormy Crawford, reflected on childhood memories of the Santa, bought by his mother, Lucile Jokerst Crawford, and his uncle, Alvin Petroquin, in a December 1997 column in the Herald.

“As a young boy it appeared to me to be almost a real Santa Claus,” he wrote. “It was very large and very attractive.”

He added that, “It appealed to all the children, me included, who sat outside and watched this Santa Claus.”

He recalled that the Santa actually caused traffic problems, with motorists slowing down or stopping to watch the moving figure in the window.

Crawford related that the Santa was boxed up and stored for many years, before being brought out of retirement by Crawford in 1997 and put in the window at the Windows to the World of Wildlife Nature Center at Pointe Basse Plaza.

The Santa was again in storage for many years.

After Roger Knight bought the house where the Dorlu Shop  had been located, he heard about the legendary Santa.

“We traced it down and found out Bob Wolk had it stored in the museum basement,” he said.

Wolk let Knight borrow it. It was no longer operational, but Knight was able to repair it and get it working again. It graced its  original location  in 2019, before going back to the museum.

“There aren’t many things in life you can go back to,” Crawford wrote in 1997. “In this case you can. Santa hasn’t changed a bit. He is the same Santa Claus that he was when we unpacked that crate at Christmas in 1955.”