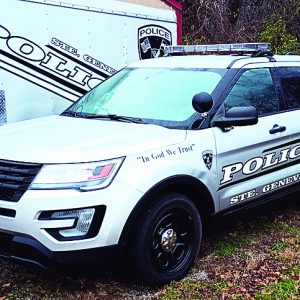 Some aldermen have an issue with this 2018 Explorer being donated to the R-II School District. The car may be worth up to $12,000, if sold or traded in for a new police vehicle.

Whether to declare a 2018 Ford Explorer used by the police department as surplus property and donate it to the Ste. Genevieve R-II School district was again a hot topic at a Ste. Genevieve Board of Aldermen meeting.

The police vehicle would be used by School Resource Officer Christy Clark.

At the Nov. 10 board meeting, Ward 4 Alderman Joe Prince had objected to the donation being in the consent agenda. At his urging, it was moved into “New Business” for further discussion.

At that time, he argued that with the inflated prices of used vehicles today, it would not be fiscally responsible to give it away. He estimated it might be worth $12,000 today, as opposed to a previous vehicle donated to the school, which was worth about $3,000 or $4,000.

The resolution was approved by a 4-2 vote, with Prince and Ward 2 Alderman Bob Donovan voting against it.

When Mayor Paul Hassler requested a motion to approve the resolution, Mark Bishop, city attorney, noted that it had already been approved.

“You already approved it, and it’s my understanding the agreement has been signed,” Bishop said.

Prince asked to speak on the subject and made a motion to rescind the resolution.

“My problem is, we are a city with a budget of roughly $4 million,” he said. “They (the R-II district) are an entity with a budget of $24-25 million. We are not in any position right now to be donating anything. Because, like we discussed at the last meeting, we have improvements to the 911 system that we don’t have any money for. We don’t have any money to replace the (drug) dog. The chief made a comment that he believes he can get donations to help fund the dog. I’ve had people come into work and say if we can afford to give a $12,000 vehicle away, they’re not going to donate to the dog because we’re not acting fiscally responsible.”

He noted that Clark’s resource position “is not in jeopardy,” while the K9 program is.

“We’re not in position to just give our stuff away and then go out and ask for donations,” he said. “Let’s put this on hold and revisit it when we find out what we’re going to be doing with the dog.”

He noted that, “The dog is just as much an asset to the school as the car is.”