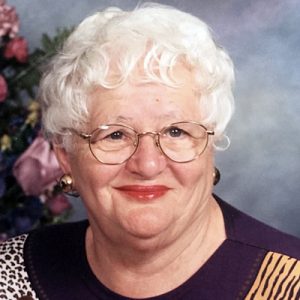 The Clergy was Rev. James Schaefer.

Burial was at Sacred Heart Catholic Cemetery in Ozora, MO.

Memorials can be made to Sacred Heart Catholic Church and the Missouri National Veterans Memorial in Perryville, MO.

She was a member of Sacred Heart Catholic Church in Ozora her whole life. Patsy taught school at Independence School House years ago and drove the school bus for Fallert Bus Service and worked at State Farm. She raised thirteen wonderful children. Patsy enjoyed reading, playing cards and games.