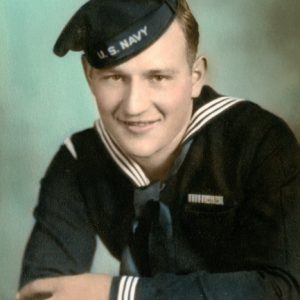 Burial will be at Valle Spring Cemetery in Sainte Genevieve, MO with military graveside services performed by VFW Post 2210.

Memorials can be made to Safe Harbor Hospice

Marvin was a member of VFW Post 2210, Am. Legion Post 150 and Knights of Columbus 1037.  He loved to spend time outdoors, trout fishing, hunting, camping and horseback ridding.  Marvin served in the United States Navy on the USS California BB44 as a Gunner during the WWII, he enlisted in the United States Navy in November 1943. Boot training was in Farragut, Idaho, after which he was stationed in Clearfield, Utah for two months. He was then sent to San Francisco where he was transferred to the South Pacific to the island of New Caledonia, then onto Hebrides where he went aboard the USS California and served as a Gun Striker, Seaman 1st Class.

Having seen action in the invasion of the island of Leyte, Battle of Tsugaru Strait, and the invasion of Luzon, all in the Philippines. Also, the Battle of Okinawa off Japan. He received his honorable discharge in 1946.

Marvin has always considered his service to his country as one of his proudest moments. He has never been sorry that he served in the United States Navy.