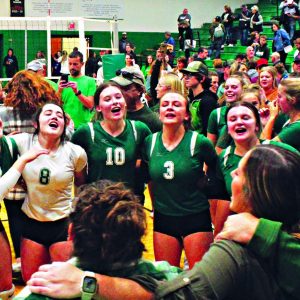 Members of the Ste. Genevieve volleyball team sing John Denver’s “Country Roads” after defeating powerhouse Notre Dame Bulldogs of Cape Girardeau in a five-set comeback during the MSHSAA Class 3 sectional playoff at “the J” at Ste. Genevieve High last Thursday (Oct. 27). With the win, the Dragons qualified for the state quarterfinal for the first time since 2017. (PHOTO BY MICHAEL BOYD JR. / STE. GENEVIEVE HERALD) 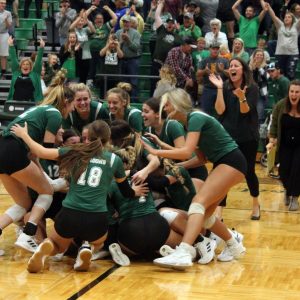 Members of the Ste. Genevieve volleyball team jump in a pile together after winning the MSHSAA Class 3 sectional over Notre Dame Thursday, Oct. 27, 2022. The Dragons advanced to the state quarterfinals. (PHOTO BY MICHAEL BOYD JR. / STE. GENEVIEVE HERALD) 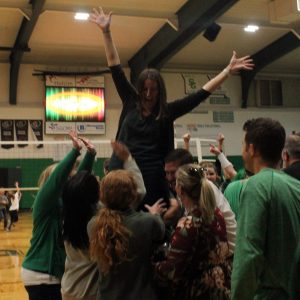 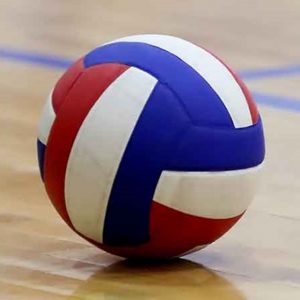 The only two things standing between second-ranked Dragons and the elite eight were an old enemy and the biggest enemy of them all: themselves.

But, Ste. Genevieve reached the state quarterfinals anyway for the first time since 2017, but boy they sure make it interesting.

Senior Tessa Grass timed the match-clinching block on match point and the cardiac Dragons celebrated wildly as they survived a five-set thriller  —  25-15, 25-27, 20-25, 25-20, 15-12  —  that went over two hours against Notre Dame Thursday night at the Peggy J. Johnson Memorial Gymnasium.

“It’s amazing, it’s every little volleyball girls’ dream come true,” Grass said. “We’ve been saying since districts we going to try to make the impossible, possible, and that’s exactly what we did tonight.”

In the house that the late, beloved Miss J built, the host Dragons needed all five games this night to bring down the state powerhouse from Cape Girardeau during the MSHSAA Class 3 sectional match.

“We gave everyone their money’s worth,” said third-year Dragons’ head coach Carla Basler.

Ste. Genevieve remembered that Notre Dame ended the Dragons’ season in the sectionals in 2018.

But on this night, the Dragons had seven very experienced seniors to counter, including Dru Koetting, who had a whopping match-high 33 kills and 17 digs in the process.

Ste. Genevieve (31-4-2) won the opener easily, but abandoned their offensive plan for a moment  —  or at least failed to go to Koetting  —  after the northern Bootheel Catholic school responded with a daunting rally over the next two rounds.

The Dragons lost the next sets  to find themselves in a 2-1 hole. No problem, right?

“It’s just surreal,” Koetting said. “We started out like strong, and then fell apart in the second and third set. We noticed it was our errors and had to cut down on those and just executed our gameplan really well in the fourth and fifth set. It’s just so surreal, I can’t wrap my head around it.”

Looking like the season would come to an end right here, Ste. Genevieve somehow came up with a furious rally of its own to claim the match by taking the fourth and fifth games, respectively.

Koetting was a big part of finding holes in the ‘Dogs’ defense this night.

“I’ll brag on (Dru),” Basler said. “She does a tremendous job. She’s really hard on herself. If the ball doesn’t hit the floor when she hammers it, she’s like what’s wrong, there’s something wrong with my approach. I’m like ‘no, you just keep hammering away and it will go eventually.’ She does do a good job of getting right back in there and putting a good, productive swing on the ball, which is hard to stop because it’s wicked.”

With the win, Ste. Genevieve won their third straight match and for the seventh time in eight matches.

But Notre Dame is Notre Dame, no matter the sport.

“(Notre Dame’s) defense it amazing,” Koetting said. “We had a fight tonight. Between them and Farmington, we needed to face that tough defense at this point of the season.”

The Dragons had everything going their way in the second set, leading 18-8 at the time but the Bulldogs (23-8-4) made an adjustment that allowed them to steal the set and it carried over to the third game as well.

“We came out in that second set kind of tipping,” said Grass, who had nine kills and 10 digs and the match-sealing block. “We were up and we were ready but it just wasn’t like it was that first game. Coach just told us we gotta swing, (Notre Dame) is not a team that’s going to let us just tip on them. We fixed that and as soon as we fixed it, we gained our momentum again. We knew there wasn’t going to be a time that they stopped fighting so we had to keep going.”

Neither team knew what to expect in the final round as both teams were tied 12-12, but Ste. Genevieve took advantage of the Bulldogs three serving errors in that decisive set.

Alli Byington nailed an ace serve in that stretch.

“Alli came up big with that serve,” Basler said. “And then (Notre Dame) missed on a couple of pretty timely serves on their end. I thought we really handled serving on our end in that last set.”

Grass then closed the contest with a timely block that fell back to Notre Dame’s side, and the celebration was on.

“We have wanted this since our sophomore year and it never worked out,  it never worked out,” Grass said. “Finally, in our senior year, we got it. I can’t even explained to you the feeling. It’s so much happiness but we’re so ready to get to work now.”

Arie Taylor served up six straight points with an ace at one point, and had 13 kills and 28 digs.

Byington finished with an ace and 15 digs.

Libero Maya Watts had 35 digs. She was seen after the game with a bag of ice on her ankle.

The Rubel sisters Tori (senior) and Kate (freshman) lived up to everyone’s expectations, dominating the net all match long. They evenly split 20 kills in the match.

“One point at a time and I kept talking to (assistant coach) Mariah (Roth) that we’ve got to pull away,” Basler said. “It eventually happened. It helped when the two Rubel girls moved to the back row because the others’ blocks weren’t as big.”

Having just won the district title two days earlier, the Dragons now move on to the state quarterfinals which just played out Saturday afternoon against all-girls private school Ursuline Academy.

The Bears (14-11-1) defeated the Gateway Jaguars (9-8) in straight sets in the other sectional this night.

“We just gotta play like (Ursuline) is (NCAA) DI,” Koetting said. “We can’t expect them to hand it over to us either. We haven’t heard anything about them because they don’t get out of St. Louis much and we haven’t crossed paths with them anywhere. They’re all good at this point so we just got play our game, continue to communicate and just do good.”

The Dragons last were in the state’s elite eight in 2017 when they lost to Lutheran South (Affton) Lancers; and they have not been to the final four since 2008.

“Down 2 to 1 and going into the fourth set, I felt our leadership in that huddle was the difference. They weren’t ready to give up on each other , they weren’t willing to give in. They were not ready for this to be it. We talked about fresh start and if you made a mistake, you got to let it go and fix some things. We changed our defense a little bit because we were getting hammered in the back spot, so rotational defense at that point didn’t make sense so we switched the perimeter.”

I think that being seven seniors, they’re not ready to be done. One of our final practices before coming into districts I had them each tell each player what it is that they love about each other. That commodity among each other means that they’re not just playing for themselves. I think that is was kind of team bonding pieces we had. I did the same, telling them what I love about each of them. In case we didn’t get any other time to tell each other, we were going that take care of before districts started.

“Just keep breathing there in that last set. I was cheering, I so happy for my teammates, but I was like you just gotta breathe, calm down and it will all work out in the end.”

“We were really doubting ourselves and when we’re like that, we don’t play good at all. We were like this could be out last game ever. Like we have to play for one another we have to execute everything we do. We pushed through it.”

“We just focused on our mistakes and cut them down. Cape-Notre Dame is not going to hand it to us. We got to push and got to push hard. We fixed our defense, we communicated more and I thought it really turned out well.”