PARK HILLS, Mo.  —  Maybe the Dragons just needed that loss in the conference tournament finals. Maybe they needed to be challenged a little bit to see that they were indeed capable of losing.

Whatever happened between a week ago and now, top-seeded Ste. Genevieve woke up just in time here last Tuesday at the T.J. Foulon Fieldhouse, victorious for the 30th time and very-much elated after 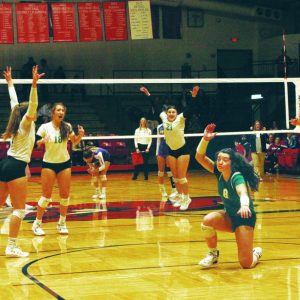 Ste. Genevieve senior libero pops up after dodging the volleyball as it sailed out of bounds for the distict-clinching point as her teammates begin their celebration of the championship during the Dragons’ sweep of Potosi last Tuesday (Oct. 25) at Central High’s Foulon Fieldhouse in Park Hills.  (PHOTO BY MICHAEL BOYD JR. / STE. GENEVIEVE HERALD)

Playing in their eight consecutive district final, the second-ranked Dragons rolled right through the confident and hungry eighth-ranked Trojans in straight sets  —  22, 18 and 22  —  to capture their first district championship since 2019.

“I’m just so proud of them, I think they know that,” said Dragons’ third-year head coach Carla Basler, a district champ in her third try. “When we play the way we can play, it’s fun to watch. We always talk about the next time we step out on to the court, let’s do something we can be proud of. So on to the next (match).”

And the next one is? Just guess.

Yep, that Catholic school from Cape Girardeau for a state-sectional matchup in two days (Thursday, Oct. 27).

The been-here-before Dragons (30-4-2) won their second straight match and for the sixth time in their last seven contests, denying Potosi (24-6-4) the ever-elusive district crown once again.

Previously, Ste. Genevieve had been the one denied of the district title, losing the last two after winning four districts in a row between 2016-2019.

“This is one of their goals that they wanted at the beginning of the season, winning districts,” Basler said. “So to make that a reality is something every team hopes for and we were able to make it happen tonight.”

For the Trojans, their dreams of that elusive district title are crushed once again, despite the state ranking and 20-plus victories.

The Dragons also snapped Potosi’s four-match win streak, that included defeating Valle Catholic in a thrilling five-set semifinal the night before to set up a possibility of winning the district trophy.

But perhaps the Trojans were worn out from that win over Valle because they offered nothing against the Dragons’ senior-loaded lineup 20 hours later.

Potosi’s dynamic trio frontline, that caused so much trouble for Valle, was neutralized this night.
“We had a gameplan of knowing where No. 7 (Ava Robart), No. 32 (Paige West) and No. 8 (Blair Sitton) were on the floor at all times,” Basler said. “We had to, making sure that we had some sort of decent type block where it be a triple or double or a well-placed single block. We knew that (Robart) could get a hold of the ball and be hard to stop if you don’t get a block.”

Seniors Dru Koetting and Arie Taylor hammered the Trojans’ defense all match. The two often got high or got low, and senior Tessa Grass served up five aces with a few kills over her own.

Koetting had 19 kills offensively and 13 digs defensively. Taylor had 16 kills and 24 digs.

“Maya and Arie are great defensive players and they both made some really huge plays back there,” Basler said. “We talked a lot about defense and a lot of times defense is just you’re willing to make the impossible, possible. That’s kind of been our slogan and motto lately, like we’ve got to try, we got to go, and they do such a good job of never giving up on what seems like it should be a point for the other team.”

Grass added five kills and five digs to go with her five points serving, while Lexy Parmer had 10 digs.

Sophia Huck and Devyn Basler both had 19 assists apiece.

It was the second time Ste. Genevieve defeated their conference rival this season, also a sweep.

It also was the fourth tournament final for Ste. Genevieve.

One final they were not declared champions because they did not win the “right” final (Dig for Life), another they rolled through the field without losing a set to claim that trophy (Perryville invite), and the other they lost (MAAA Conference Tournament final), so to win this one meant they have a chance to win the Big One.

But one match at a time as familiar enemy Notre Dame Bulldogs of Cape Girardeau’s stands in the way of that dream next in a state sectional matchup that played out on Thurdsay, Oct.27 (see sectional recap).

However, the Dragons get to host the sectional.

“Next round is (Thursday, Oct. 27) so back to work tomorrow (Wednesday),” Basler said.

“The girls played tremendous. It was a great team win. They gave it there all. I’m just so stinkin’ proud of them.

— Basler on the victory

“I kind of started this whole sitting thing this season. But sometimes they do things that is so worthy of standing. I like to celebrate right along with them, show that I’m proud of their accomplishment through and through. We love that energy and we feed off of it.”

— Basler on why she’s up and down on bench

“I do think we controlled our errors. I thought we passed pretty well.”