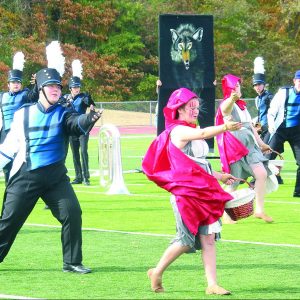 Hermann band members act out the tale of Little Red Riding Hood during one number.

“This was one of our largest festivals with 27 bands and over 1,000 student performers,” said John Mooney, SGHS band director. “It went well and is a major fundraiser for our band boosters.”

The competition featured high schools as small as Puxico (144 students) and as big as Marquette (1,793 students).  Illinois schools Anna-Jonesboro and Murphysboro also performed, along with Perryville, Park Hills Central, and Hillsboro.

It was divided into Classes 2-6 and is a highlight of each band’s arching season.

“The bands spent months preparing and perfecting their performance,” Mooney said, “working several hours a week. The marching arts is a popular activity all across the country and give all students an outlet.”