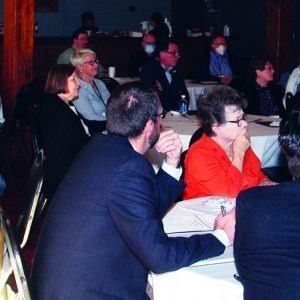 A good-sized crowd listened to several speakers who brought the French colonial era of the Illinois Country (as this region was known) to life.

Mark Barbeau, CFSC president, gave opening remarks.  The lineup opened with Sharon Person, emerita professor of English/English as a Second Language at St. Louis Community College, speaking on “Encountering the Enslaved in 1720s Kaskaskia.” Originally, she was to share time with Ste. Genevieve scholar Carl J. Ekberg, who was to speak on “Dawn’s Light: Kaskaskia’s Most Desirable Woman.” A family illness forced him to cancel.