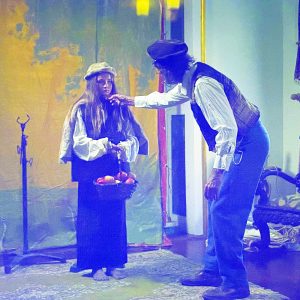 Lucianna, an 1870 girl selling apples (Halle Esselman), is about to be photographed by Jackson Buel (Bruce Schultz).
PHOTO COURTESY OF MOTION DOG FILMS

Much of the film was shot at the historic Ste. Genevieve Academy, built in 1808.

The film, titled “The Spring,” takes leading lady Mary Michelle back and forth between today and 1870.

According to a blurb for the film, “Two kindred souls, one, an ex-slave working in an 1870 post-war brothel, and the other a young woman from the wrong side of the tracks in modern-day Missouri, unite through supernatural circumstances to uncover a 150-year-old reign of serial murders.”

“We sought out Ste. Genevieve because it’s famous for having beautiful, historical locations,” producer AJ Koehler said. “This one (the Academy) is absolutely amazing. It’s been here since right around the turn of the 19th century. It’s an amazing find. The whole town has been amazing.”

Michelle, who has her own profile on the Internet Movie Database (imdb.com) profile, has been enraptured with director Thomas Smugala and the Motion Dog crew.

“I am in love with the crew and Thomas Smugala has been amazing,” she said. “His framing is just breathtaking and his mastery of lighting is … well, it looks like a painting. He’s an artist. His cinematography speaks volumes.”

Smugala and Koehler were involved with the visually stunning “573,” a regional magazine that published for several years and still exists online.

“We can’t give a lot away about the characters or about the script quite yet, but she’s an amazing woman,” Koehler said of Michelle. “She’s in music and she does acting. She was the lead in ‘The Perfect Wife,’ which was a fantastic thriller and she was amazing.”

Frank and Annette Rolfe, Academy owners, have allowed filming in the interior of the house as well as on the grounds.

Michelle praised Smugala’s ability to capture the mood he was seeking in the interior shots in the restored gem.

“Just because it’s beautiful and there are antiques, doesn’t mean the average Joe will be able to tell the story,” she said. “It’s not just getting behind the camera and moving the thing around. You have to have the passion, the drive, the skill set, the heart, the patience. It’s a labor of love. It takes time and it’s not something that can be rushed. Just to watch him and work with him was amazing.”

She added that Smugala caused her to “stretch” herself as an actress. She also had praise for Koehler.

“I’m beyond grateful to him and to this beauty, AJ Koehler, who is remarkable,” she said.

Koehler, in addition to her production duties, is also acting. She plays Michelle’s sister in both the present and past scenes.

“The crew is magical,” Michelle said. “There is so much unity and professionalism. People are willing workers to bring an amazing script, a phenomenal story to fruition. We want to make it a wake up call.”

Bruce Schultz, a career journalist from Lafayette, La., who travels to various reenactments and events, taking tintype photos, plays an 1870 photographer. It is his first real acting experience.