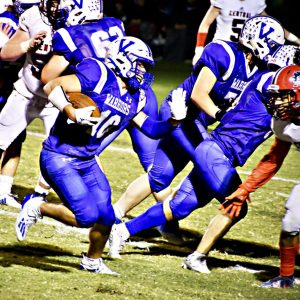 Valle Catholic running back Bryce Giesler (10) rushes for positive yardage in the second half during the Warriors’ 40-30 rally over the Park Hills Central Rebels during Week 6 conference action Friday night at Father John Dempey Field. (TASHA GIBBS PHOTO / SPECIAL TO THE HERALD)

In a battle of state-ranked, undefeated conference foes, Valle Catholic scored the game’s final 19 points  –  all in the fourth quarter to rally for a 40-30 Week 6 victory over Park Hills Central Friday night. It is the first time the two teams have faced one another since 2005.

Running back Bryce Giesler and quarterback Chase Fallert provided almost all of the offense as the host Warriors escaped to stay atop the MAFC-White Division standings.

Both would head on to LU (Naeger in football, Schweiss in baseball) before becoming teachers at these respective schools. Ironically, the two were named as head coaches of those prep programs a few years later. Their very first game? Each other.

For more, check out the Herald’s Oct. 5 printed edition.