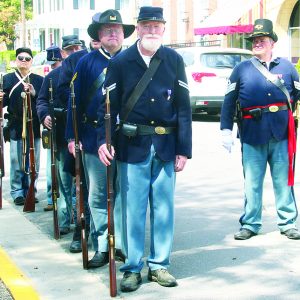 No doubt visitors to Ste. Genevieve are charmed by the dramatic reenactments of Civil War incidents and by the Sons of Union Veterans’ fired volleys.

Entertaining tourists, however, is not at the heart of the Civil War organization.

Rather, keeping the memory of the War Between the States alive and educating people about the skirmishes, the passions and the divided loyalties that tore Missouri in two a century and a half ago are the driving forces behind the group.

“To me, the history is one of the most important things that we have going,” said Michael Schaaf, commander of the J. Felix St. James Camp # 326, Sons of Union Veterns (SUV). “ As an organization, we’ve got some very intelligent people about the history of the Civil War. To me they’re teachers. They might not have a degree, but they’re teachers.”

Most people may tend to think of Virginia and Pennsylvania when the subject of Civil War battlefields comes up. Missouri, although not always given its due by historians, was a hotbed of action.

“Most people don’t realize it, but in Missouri there was the third most number of skirmishes and battles of any state in the United Sates,” said Bob Mueller, SUV member nd local historian. “I think it’s important because, especially here in Missouri, we were a divided state, even a divided town. We had people who fought on both sides, the Union and the Confederacy.

“We had so many people locally involved. That’s why we need to keep it fresh.”

One was the declaration of martial law on Aug. 30, 1861. Mueller portrayed Gustavus St. Gem, who was named provost marshal of Ste. Genevieve in September 1862. In Sept. 2021 the group reenacted this event, tied in with a couple of others, such as  Federal troops taking over the courthouse (Oct 1, 1864), General Order 13 bar¬ring the selling of liquor to the local militia (May 19, 1865) and the naming of prominent citi¬zens as possible southern sym-pathizers (Apr 14, 1864).

A couple of weeks ago, the group reenacted the seizing of money from the Merchants’ Bank of St. Louis, Ste. Genevieve Branch by Federal troops, to keep the money out of Confederate hands.

During the reenactments, the group gets to show off some acting skills. Martin Aubuchon has specialized in arrogant Federal officers, like Major John McDonald and Major George M. Avery. Gary Scheel has been the loyal sergeant, carrying out unpopular commands. Meanwhile, some townspeople like Bill Naeger, Mike McDaniel and John Karel have had important speaking parts as local citizens unwilling to accept the draconian measures.

“We do a lot of research about those events,” Mueller said. “Sometimes we combine several different things that happened, so there’s a little bit of street theatre in there, which is good. We want audience participation. It’s also a learning experience for them. It’s fun.”