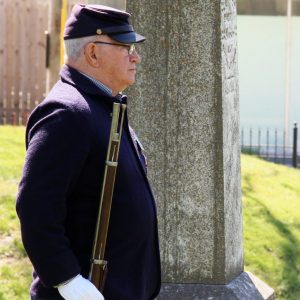 Paul Kist stands guard next to the grace of Augustin St. Gemme, father of J. Felix St. James in april 2021, on the anniversary of St. James’ burial.

Honoring the fallen is also important to members of the J. Felix St. James Camp # 326, Sons of Union Veterans (SUV).

For instance, they do a memorial for their namesake, Lt. Col. J. Felix St. James on the anniversary of either his death date (April 8) or his burial date (April 14) each year. A former Ste. Genevieve mayor and local lawyer, he was the first local man to enlist. He served as a lieutenant colonel in the Missouri 13th Infantry and was killed during the Battle of Shiloh, in Tennessee on April 8, 1862. He also fought at the Battle Fort Donaldson, Tennessee in February 1862

Surviving Union veterans formed a veterans group called the Grand Army of the Republic (GAR) in the second half of the 19th century. The local chapter was the J. Felix St. James Camp # 326. Therefore the local SUV adopted the same name and number for its group.

Gary Scheel explained that the SUV is an off-shoot from the GAR.

“Once the Grand Army of the Republic soldiers started dying off, then the Sons of Union Veterans of the Civil war took over,” Scheel said.

Bob Mueller noted that the GAR vets would frequently march in parades in Ste. Genevieve.

“There were more parades back then,” he said.

As the group aged, they began riding in cars during the parades.

They have compiled a list of local Civil War soldiers. They now have more tan 1,000 names. They also try to find where the men are buried.

“We contact Find A Grave and also register it with the Sons of Union veterans of the Civil War,” Mueller said.

“We’ve probably don at least three of them in the last couple of years,” Mueller said.