Valle Catholic’s reintroduced itself to the Mississippi Area Football Conference as its defense continued its dominance with a 59-0 shutout of Fredericktown Friday night at FHS.

They hit ‘em like a MACK truck, mainly Carson Tucker, who scored two defensive touchdowns in the opening quarter to go with two other offensive scores.

After running back Bryce Giesler, who had three TDs on the night, ran in a 32-yard TD, Tucker ran back a interception for a 28-yard Pick-6.

Tucker closed out the first quarter by recovering a fumble and returning it 18 yards for another TD. He also led with nine total tackles, including four for loss and recorded a sack.

G. Fallert, the QB1, threw for 132 yards on 6-of-8 passing and two touchdowns on the night where he saw limited action due to the route.

Bryce Giesler scored three times. He had 63 yards rushing and two TDs, and had 30 more yards receiving and a TD.

Tim Okenfuss had 60 yards rushing, including a 47-yard run. He also had a sack defensively.

Brandon Giesler had seven tackles and a sack.

Isaac Viox had six tackles and helped out on a sack.

This season, Valle joined the MAFC’s White Division (midsized schools) after leaving the now-defunct MAFC-Blue Division (small schools) over a decade ago.

The Blue Division became what is now the I-55 Conference, but Valle dominated both leagues for a couple of decades.

St. Vincent, St. Pius X (Festus) and Crystal City also left the Blue Division with Valle to form the I-55 and saw two others join them in the process: Herculaneum, which joined after leaving the MAFC-White, as well as newly-formed high school Jefferson R-7.

Valle left the I-55 last season and became an independent football club, before joining the MAFC-White. They did so to toughen their schedule due to MSHSAA’s private school only “championship factor” that has bumped the Warriors up two classes from CLass 1 to CLass 3, thus playing schools over three times their size like Fredericktown or even 10 times its size like Week 1 foe Seckman.

But Valle is 3-0 so far and won their first conference contest this seaosn. So? 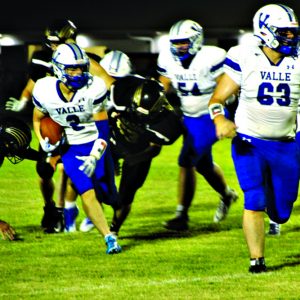