Scenes from a horror movie, right?

Ah, but Halloween is seven weeks away, so the only thing scary was how Ste. Genevieve put up six touchdowns without its primary weapon.

The Dragons got off to a rough start Friday night, but rolled in the end, mainly in the fourth quarter, for a 42-17 victory over the host Eagles during Week 3 football action.

Regardless of how they won, or who they won with, or without, the Dragons are 3-0 for the first time since the mid-2000s.

It was both schools’ first-ever meeting in any sport.

Ste. Genevieve has scored at least 42 points in all three contests this season, but this time they only allowed 17 points, a major improvement. Nine of those points came via its defense with a safety (botched snap out the back of the end zone) in the first half and a pick-6 by Devin Flye for the game’s final score.

The Dragons slowly built a 36-10 lead in the second half off three straight TDs after intermission. They led just 7-0 after one quarter and 16-10 at halftime and 22-10 heading into the final frame.

Ste. Genevieve’s passing game was basically non-existent without their star receiver for an unknown amount of time.

Senior quarterback Aiden Boyer and running back Ayden Butcher scored the Dragons’ first four touchdowns and rolled from there.

Boyer had 280 all-purpose yards and two TDs, including 216 yards scrambling and both scores, while throwing for only 64 yards on 4-of-11 yards passing. He provided the game’s first big play with a 69-yard keeper for a 7-0 lead.

Usually Boyer, QB1 since starting the 2020 season, has more passing yards than rushing, but this was no ordinary day for the Dragons, big full moon and all.

Defensively, Gabe Willett had 11 tackles, including five for loss. Jack Farlow had six.

Will Vaughn had five tackles, including two for loss and two sacks.

Landon Thompson, Johns and Butcher each had two tackles and each had a tackle for loss for the Dragons’ but Flye’s pick-6 was the top defensive highlight.

The Dragons host MAFC-White Division rival Fredericktown Blackcats (1-2) for homecoming at 7 p.m. on Friday. The Blackcats lost 59-0 to Valle Catholic, which made its return to the MAFC this season.

Orchard Farm High literally is a school built in the middle of several orchards. It is in eastern edge of St. Charles County just off in the distance about seven miles from where Interstates 70 and 270 intersect. … The Dragons’ first three opponents have a combined 0-9 record, and Fredericktown is the first team this season the Dragons will face to have won a game so far. … Fredericktown has not won since its season opener. 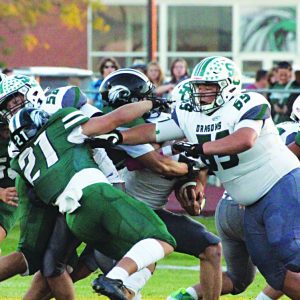 Ste. Genevieve’s Jacob Schweigert (69) and Thomas Pecaut (58) pancake an Orchard Farm linebacker to create a hole for running back Jack Farlow to run through during the Dragons’ 42-17 Week 3 road victory Friday night at OFHS.The Dragons are 3-0 for the first time since the mid-2000s. (PHOTO BY MICHAEL BOYD JR.)