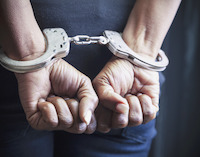 Currently an inmate in a Utah prison since 2020 following an extensive history of sexual assault allegations in that state, he has now been charged with a similar crime in neighboring St. Francois County, where court documents list Ste. Genevieve still as his home.

The new charges come from an incident that was reported in June 2016 before his Utah convictions. The SFC woman alleged that Racer forced her to have intercourse in the back seat of a car at the Knob Lick Tower, just south of the city limits of Farmington.

For more, check out the Herald’s Sept. 7 printed edition.