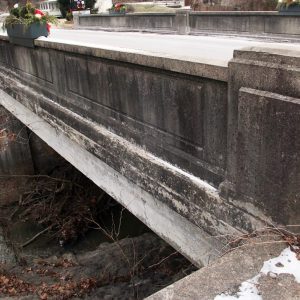 The circa 1936 Fourth Street bridge over the South Gabouri Creek may be replaced with an 80-20 matching Federal Land Access (FLAP) grant.

Word has been received that Ste. Genevieve County has been approved for a Federal  Land Access Program (FLAP) grant to replace toe Depression era bridge over the South Gabouri Creek on Fourth Street.

Built during the mid 1930s, the bridge – located next to the city hall – is technically under the county’s care, since it connects a county road (White Sands Road) with Highway 32.

Attempts had previously been made to obtain an Off-system Bridge Replacement and Rehabilitation (BRO) grant for this purpose.

“Michele put it together,” he said.

Second District Commissioner Randy Ruzicka also played a big role. Nelson said it was Ruzicka who first asked Missouri Department of transportation officials whether a FLAP grant could be used for the bridge.

Ten, when some disagreement arose over ownership and responsibility for the bridge arose, Ruzicka – a former city alderman – served as a liaison with the city and helped convince the board of aldermen and City Administrator Happy Welch to back the grant request.

Welch wrote a letter, recommending the grant be given, as did Chris Collins, then the superintendant of the Ste. Genevieve National Historical Park.

The city and county have been concerned about this bridge and the North Main bridge over the North Gabouri, which is about the same age. Both have considerable traffic, including big trucks and school busses.