Coming in from the north, Leon Basler brought the small plane down smoothly on the small grass airstrip – just as he had more than five decades earlier.

Basler is still flying, 55 years after making his first flight with his instructor Louis Sexauer in the back seat. 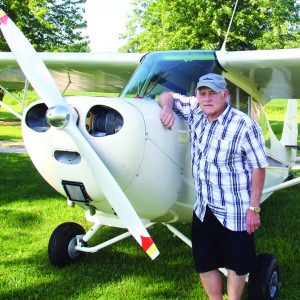 In fact, for the past 11 years, he has been flying the very plane he took lessons in from Sexauer back in 1967, on that same airstrip on the northern edge of  Ste. Genevieve.

“This is the airport I flew out of,” Basler said. “The trees weren’t here then and there was a hangar that held about five airplanes. They always had corn or crops around it all these years.”

Basler, who won the Wright Brothers Master Pilot Award in 2018, has never lost the flying bug. He still remembers the men who inspired him to take up the hobby/vocation.

“Louis Sexauer was the one who taught me to fly,” Basler said. “Louis was a great guy. There were a lot of pilots around here who influenced me to fly.”

“They all hung around over here,” he recalled. “These guys were all friends of mine. I’d come over as a kid and aggravate them and hang around and learn what I could about airplanes They were good guys. Their families would come over after church on Sundays and there was a lot of people who would come over here and watch the airplanes fly.”

“You don’t see as much of that today.”

That, he said is largely because of restrictions on pilots following 9-11 in 2001.

“Used to be, you could walk out to an airplane and touch it,” he said. “You still can at the small airports, but at any airports at any size, like Cape Girardeau, there’s security there and stuff. This is a private strip so they don’t have all the federal funding.”

Basler keeps Sexauer’s memory alive on the side of his plane, with the inscription, “Flights in memory of Louis Sexauer.”

REUNITED WITH THE CHAMP

“I found it about 12 years ago,” he said. “I kind of knew where it was. I called this guy over a period of about eight years and asked him if he was interested in selling it.”

“The wings were off of it, but the guy completely rebuilt this thing from scratch,” Basler said. “He never did put it back together. He had this all wrapped up in his hangar in a climate control, so it was in good shape. I took it by trailer back to Minot North Dakota and put it back together.”

Although the pieces were in pristine condition, the plane had not been flown in 36 years.

Its skin is a canvas similar to that used for truck covers.

“This airplane’s in better shape tan it was when I learned to fly on it,” Basler said. “Louis kept it out there on his farm.”

Being able to pilot the plane he learned to fly in gives Basler a good feeling.

“It was exiting to have the same plane I learned in,” he said. “You don’t get that many opportunities.”