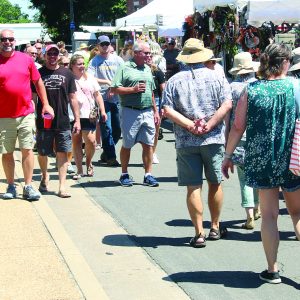 “I know, according to a lot of our vendors that they had some record sales and people selling out, so I think we had really, really good numbers Saturday,” she said. “Sunday, the second day, is always a little less, of course, but Saturday set some record numbers for us.”

Temperatures only hit the mid 80s on Saturday and about 92 on Sunday, with no rain.

“The weather helped out,” Inman said. “We were lucky with that.”

“We did really well,” said Shellie Schmelzle of Rustik Sand Kandles. “Usually, when the weather is nice, we don’t get as many people coming inside. We usually do better when it’s either really hot or raining and people want to get out of the weather.”

“I think a lot of the shop owners were really pleased this year, too,” Inman said. “I know a lot of them put things out front this year, which really helped them.”

Everything Inman heard from visitors and vendors was positive.