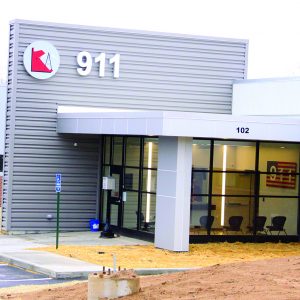 Ste. Genevieve and St. Francois Counties share the state of the art 911 center in Desloge.

Both counties had aging, outdated equipment in 911 buildings set up in the early 1990s. The expense of one county making all the needed upgrades was prohibitive.

The combined 911 center in Desloge was and largely still is state of the art.

Today, however, the center’s radio equipment is becoming outdated.

“We’ve been hearing from Jeff City for months and months, how much money they’ve got up there,” Presiding Commissioner Garry Nelson said. He said had heard that some $265 million was going to high-speed internet – for enterprises that would provide huge profits for the companies getting the funding.

“What we’re looking at is a 911 system that is dilapidated,” he said. “The radios on the cell towers, the radios the first responders have in their cars and emergency vehicles are obsolete. If I’ve got my choice between high-speed internet and a 911 system that’s going to work right, I’ll take the 911 system.”

Part of the problem has been the decreasing use of land line phones. Originally, 911 operations were largely funded by a special tax on phone lines.  With the rise of cell phones, however, land line tax income has dropped by 70%.

“We’re wanting to know how we can possibly get some help,” Nelson said.

Wells explained that there are three functions, the 911 backlog equipment, the internal computer systems and infrastructure, and finally, the radio communications.

“You have to be able to put that call out to your responders to help people,” he said.

He said that newer buildings, such as schools, have been built to be more earthquake resistant, which often knocks out cell phone and radio signals.

“We’ve got to do imagery and mapping to make sure the whole state is at a minimum standard of imagery and mapping for the next generation of 911 to find people,” Wells said.  He said counties without 911 service should be tied in to existing centers. Getting the whole state up to a minimum standard and getting people trained across the state to operate the system is the first priority, Wells said.

After Wells described needed changes, Francis said, “It sounds like you know what you need.”

Nelson said that fees generated by the dwindling landline tax are barely $100,000 a year now and the total needed upgrades in the millions. “We don’t have it,” he said. “Our fees don’t generate it.”