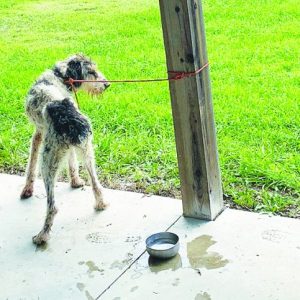 Fortunately for Abby, a canine from just north of Perryville, Robert Kavailiauskas of Ste. Genevieve decided to take his family and some other children cave exploring Aug. 6.

That visit led to Abby being rescued from a dark cave prison.

“We had planned a cave trip down to Perryville for three of my kids and two other kids and some other people,” Kavailiauskas said. “We ended up going to this cave entrance. There were actually about 30 different cavers there who were going into another part of the cave and the place that we went was the entrance to a different cave that isn’t used very often.”

It is not an entrance for the casual cave visitor.

“It’s not impossible to get through, but the first 10 feet you have to belly-crawl and then you have to kind of slither down through some rocks and then eventually there’s about a six-foot drop,” Kavailiauskas said. “We were doing the trip because, if you go in that entrance, you can actually come out a mile later in another one.”

They discovered something totally unexpected inside the cave.

“We had gone through most of those issues, then when we got to that six-foot climb-down, I helped all the kids down and I sent the kids forward, like 50 feet,” he said. “That’s when my daughter yelled back to me that there was a dog in the cave. I thought maybe it was a dog that was dead or something.”

That was not the case.

“It was sitting there; It was just dirty,” Kavailiauskas said.

Two members of the party went back out and told those above about the dog.

“We had children with us and we didn’t want them going near the dog, so we just continued on the cave trip,” Kavailiauskas said. “But what was really incredible was the dog was obviously filthy, dirty, but it had a collar on it and the collar had an electric sensor. You could see that the red light was still beeping on the collar. I thought maybe it was down there for a day or two because the battery collar was still working.”

Rick Haley and Gerry Keene came down to help. They used a gym bag to see if the dog would climb into it, so it could be hauled out. Kavailiauskas said someone left an extra light with the dog in the mean time.

“When the rescuers (Haley and Keene) got there, the dog was actually standing, ready to go,” Kavailiauskas said, “and, with no problem, got it into the gym bag.”