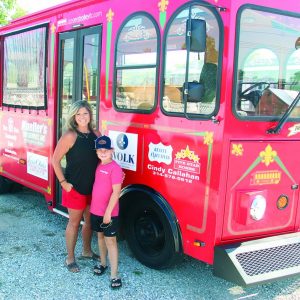 For the first quarter of the 20th century, horse and electric-powered trolleys or streetcars were prevalent in most large and medium-sized cities.

Six years ago, Sam and Oberle decided to bring the concept back to life.

The historic town seemed like a perfect fit or an old-fashioned mode of transportation. They opened Ste. Genevieve Trolley with one traditional-looking trolley vehicle, named the Jane Agnes for Sam’s late grandmother.

Two and a half years ago, his wife, Mary, stepped into takeover operations.

Each coach is named after someone in the family.

“Everyone always waits for the new name,” Mary said.

The other vehicles are Charles Dean (named after their two sons), Dylan Nancy (after Sam’s god-daughter), Sara Jane (Sam’s sister) and Mary Elizabeth (after Mary, herself).

Three of the vehicles are shuttles, set up like regular shuttle buses. The other three are designed to look like traditional trolley cars.

The reception has been good.

“Everyone has really enjoyed them,” Mary said. “They’ve gone over really well. It’s been exciting to see the business grow like it has. We’ve gotten lots of positive feedback.”

She said they have regular customers who enjoy taking the trolley to the wineries.

“They always enjoy the trips to the wineries,” Mary said. “They’re a lot of fun.””

As of Aug. 3, they were nearly booked the rest of the month.

The trolleys mainly take visitors to the various wineries in the county and other local attractions. The shuttles are used for out-of-town trips.

They also transport revelers between stops during the traditional New Year’s Eve La Guignolee and back and forth from the parking lot during Jour de Fete and other downtown festivals.

They also do weddings.