David Van Leer and T.J. Garbs of Cochran Engineering reported that the installation of the new 300,000-gallon water tank in Bloomsdale is “coming along as expected,” while the distribution part of the $2 million project also  “moving along,” during the Aug. 9 board of aldermen meeting.

Garbs reported that the tank has been installed and was being welded.

“They’re supposed to finish it early next week to mid-week,” Garbs said. After the welding is done, it will be inspected by Mid-South Tank Consulting and will be painted. He said Vern Bauman Contracting would finish up piping and other site work once the painting is done. The old standpipe will also be taken down. 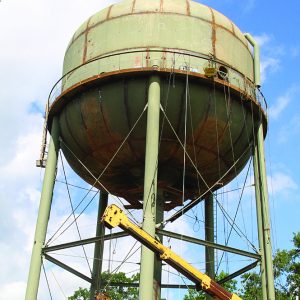 Bloomsdale’s new 300,000-gallon water tank is in place. Workers were welding on it last week. It just needs to be inspected and painted and site work completed. It is part of a $2 million water project the city is tackling.

Van Leer noted that it is “critical” that the tank’s lettering be done by November, to avoid winter weather, but thinks that will happen. “BLOOMSDALE” in large royal blue block letters will be put on the tank, making it visible from Interstate 55.

Van Leer also said he is still pursuing a possible Department of Natural Resources grant to help pay for part of the project.

Monia said it would be a big boost if one could be obtained.

“The city has never had much of a break. Not in the 25 or 26 years I’ve sat here, have we gotten a lot of free money like a lot of other places,” he said. “We’ve done it all on our own. So to have a boost like that would certainly be a shot in the arm.”

Word may be received on the grant as early as late October.

Widening the road will be challenging with retaining walls, big trees and other “obstacles” to deal with. Easements will also need to be obtained.

During the public participation part of the meeting, Kevin Wehner brought up the idea of having a Fourth of July fireworks display next year.

Wehner, who said he has training from a pyrotechnic school, said either he could design a program with fireworks and music, or the city could go with a company that would “bring a package” with 20 minutes or so of fireworks.

It was agreed that the soccer field would be a good location, if things could be worked out with the Knights of Columbus, who leases the area from the city. Monia said he would also want to run the idea by Mark Bishop, the city attorney.