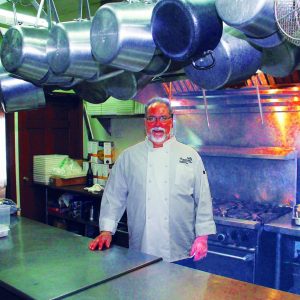 Chef Rob Beasley in the kitchen of the Grapevine Grill (shown in insert).

Connoisseurs of fine food have recognized a local restaurant as the best of the best.

Chaumette Winery has been ranked No. 1 in the nation in a USA Today Readers’ Choice contest for best winery restaurant.

Chaumette ranked ahead of runner-up The Restaurant at Justin at San Robles, Calif. There were four California sites chosen, two from Virginia, and one each from Oregon, Washington and Texas.

USA Today emailed owner Hank Johnson, telling him their group of experts had nominated Chaumette to compete among the 10 best winery restaurants in the nation. There was one month of balloting. Then the publication notified Johnson that Chaumette’s Grapevine Grill had finished in the No. 1 slot.

“That was a happy day,” Johnson said.

Johnson is quick to give the credit to Chaumette chef Rob Beasley, who he brought in in 2015, to elevate the winery’s dining experience.

“Rob’s the guy that gets the credit,” Johnson said. “It’s his deal. I can’t say I did anything for it.”

A Louisiana native, Beasley graduated from the Culinary Institute of America in Hyde Park, New York, then spent 16 years in Dallas-Ft. Worth, De Moines, Iowa and has also opened and ran restaurants in New Orleans, New York, Atlanta, Kansas City and St. Louis. He spent some time as corporate chef for Charlie Gitto’s. At one time he oversaw four Charlie Gitto’s locations. He also worked for his old friend, Bill Cardwell, who had Cardwell’s at the Plaza in St. Louis and BC’s Kitchen in Lake St. Louis.  He and his wife, Chloe, ran Pairings Bistro in Des Peres for a while, helping another friend, before getting the call to Chaumette.

“I’ve tried to cook a lot of different styles of food,” Beasley said.

He explained how he wound up at Chaumette.

“A mutual friend of Hank and mine reached out to me,” he said. “My wife and I came out, we talked to Hank and Jackie and looked around and just loved the place, the property, and signed on.”

Naturally Beasley, who lives on the property with his wife, Chloe, was thrilled at the No. 1 honor.

“It feels great. It makes me incredibly proud,” he said. “I’m proud for the whole team because it’s everybody that does what they do every day that made it possible. Day in and day out everybody shows up, everybody performs, and we all contribute. And we just work so well together. We set the expectations high and everybody holds each other accountable.”

Beasley explained some of the successful strategy, which includes getting the best and most fresh produce, game and seafood.

“I get fresh seafood from Honolulu Fish, which has been out of the water less than 24 hours,” Beasley said, as well as diver’s sea scallops from Maine.

“Ultra-fresh sea food” is the goal, while beef and pork was upgraded to all prime, grass-fed beef and all Berkshire pork.

In addition to dealing with County Line Farms and Ladd’s Family Farm, they also have their own garden near the restaurant.

“We tried to add a little more professionalism to the establishment,” Beasley said. “Instead of just hiring people that needed a job, we just hired professionals.”

That has paid off, no one on the kitchen staff having been there less than five years.

Matt Schlarmann, who has been there five years, had previously worked for Beasley in St. Louis. Another key person is Tim Benz, who runs the front of the house.

“He’s just amazing,” Beasley said. “He’s probably one of the more multi-talented people I’ve ever met in my life. He’s an incredible server and has great food and wine knowledge.”

New Orleans style barbecue shrimp is one of the most popular dishes.

“It’s a New Orleans style barbecue; it’s not a Midwestern catsup-based barbecue. The sauce is made with lobster stock, butter, lots of herbs, beer and garlic.”

A lot of Etoufee crawfish and shrimp and prime-grade steaks are sold.  Fish is also popular

“We get fish in on Thursday and we almost always sell out by Saturday night,” Beasley said.

Heirloom tomato salad is also popular during the summer.