Excitement is high at the newly-opened Ste. Genevieve Antique Mall.

The business opened last Monday, in the former home of Kisco Boiler Works, on Market Street, just across the railroad tracks and past the Welcome Center.

There are currently 70 eight-by-eight-foot booths. Phase I of the project incorporates 10,000 square feet of the historic building – the original section of which was built in 1903.

Patty Lewis, mall manager, said people have been thrilled to see the mall open. They haven’t even minded first week glitches that caused check-out to be a slow process.

“The reception has been very positive,” she said. Things have been slow; we have to enter everything manually because of some glitches and people are just waiting in line and they’re okay. I’ll walk through and say it’ll be as soon as we can. They’re just happy to be there. They’re happy to be in the antique mall. They’ve heard about it

Dr. Patrick Fahey and Dr. Susan O’Donnell purchased the old factory building in the summer of 2021, with the goal of saving it and reclaiming it for a new purpose. After an Oct. 24, 2021 tornado destroyed the giant St. Mary Antique Mall, several vendors from St. Mary needed a place to store their goods while they considered their options. Fahey and O’Donnell made the building available to them for this. Many began to ask  about renting space there. 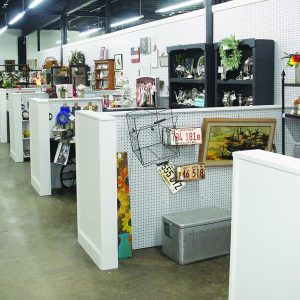 A wide array of items are on sale at the Ste. Genevieve Antique Mall, which opened its doors on Aug. 1, with 70 vendor booths.

The restoration process has been a long process and a local one, with local contractors doing all the work.

The reception the mall has gotten has  been gratifying.

“I’ve thought from the very beginning that the town needs it and that they would receive it very well,” Lewis said, “and they have. We’ve had people from all over. We had tourists in town today that stopped at lunch at Audubons, who were told about it. They came on down and of course they bought things. There’s cool stuff here. That’s been nice.”

Fahey and O’Donnell, who bought and renovated Main Street Inn after their 2016 marriage, were also pleased.

“I am overwhelmed by the number of people that have come through here in the first three days and I’m also really proud of how well it came out,” Fahey said. “It is the cleanest, sharpest, lightest, brightest antique mall I’ve ever been in. I love that we have lots of local people and local artists. We have local crafts. It’s all on display here for Ste. Genevieve.

The building’s interior is rapidly changing in appearance as more and more vendors  get their booths set up.