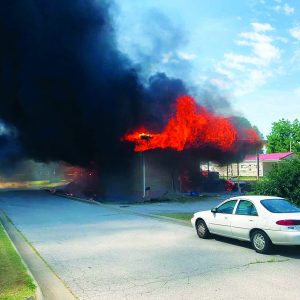 A commercial structure at 61 and Klein Street burned
Saturday morning. A trash service was located there.

The Ste Genevieve Fire Department along with St. Mary FD, Ozora FD and Zell FD were dispatched at 11:09 a.m.

“Due to the heavy fire conditions a second alarm was immediately requested which brought a truck and manpower from the remainder of the fire departments in Ste Genevieve County,” Fire Chief Kenny Steiger reported. “Due to the extent of the fire on arrival and the possibility of imminent collapse a defensive attack was established and maintained until the fire was extinguished.”

There was danger to other nearby buildings.

“There were several spot fires from flying embers on neighboring property that had to be extinguished,” Steiger said. “Several surrounding buildings received heat damage and melted siding from the radiant heat of the fire.  Several fire fighters were treated for heat related problems and released on the scene, there were no other injuries.”