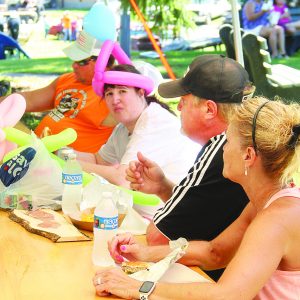 Chip Marzuco considered this year’s Spring For Down Syndrome the best one yet.

“This year’s event outdid the last 12 years tremendously,” Marzuco said. “We had tremendous weather, a tremendous turnout and everybody had their pocketbooks open and flowing. It was really, really good.”

The 14th annual event, which raises funds and awareness for Down Syndrome, included a record 404 UTVs and Jeeps taking part in the cross-country Poker Run. Marzuco expressed thanks to LeRoy and Sherry Willet and other volunteers and donors who made the event possible.

“It took a lot of people that helped out to make this a great event,” Marzuco said. He added thanks to he Knights of Columbus, who let the event use its grounds. The Willets brought in friends to help with the Poker Run.

“Without the extra support of them, it would have been tough to make it all happen,” Marzuco said.

He reported that one UTV was custom-built, with an estimated value of more than $94,000.

Marzuco said some people drove two and a half hours to take part in the annual Poker Run.

“They heard about it from other people going on UTV rides and how they were commenting about how great this ride was before,” he said. “Everybody was really, really pleased about it. I know we had one gentleman who owns Outdoor Armor and goes on rides all the time to sell his product world-wife. He said it’s the best one he’s ever been on. That definitely made us feel good.”

The day included antique tractors, vintage military vehicles, emergency vehicles and other items to view at the Knights of Columbus Hall, plus lots of food, clowns, balloons and food.