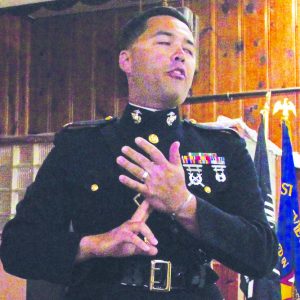 Members of local patriotic organizations gathered Monday morning to remember and pay tribute  to those who served their country and gave their all.

Kwan, who been a line and weapons platoon command officer, executive officer, company commander and foreign advisory team leader, and who deployed multiple times  for Operations Enduring Freedom and Inherent Resolve, spoke about how his desire to serve was pricked as a college student  following the 9/11 attacks in 2001.

He described a day in 2020, when to friends in his platoon, Moe and Diego, were killed in a fire fight with ISIS fighters.

The ceremonies also remembered local veterans who had died since 2020. Other deceased veterans were honored outside in the Avenue of Flags, where 212 funeral flags were flown.

Betty Arnold, past department president and local auxiliary president,presented a certificate to Doris Meyer, widow of the late Leon “Sonny” Meyer, who was commander of  VFW Lodge # 2210 at the time of his death, Sept. 12, 2021.