Operation Sand, the group opposing the proposed silica sand mine along Highway 32, is requesting the Missouri Department of Natural Resources (DNR) hold a second public meeting.

It called the May 19 meeting at the progress Sports Complex a “disaster” and said that many people would have asked additional questions, had the meeting not run so late. The letter cited technical problems and the seating arrangements as making it difficult to hear and see the presentations, as well.

“The Bluetooth microphone failed to connect to the single floor speaker on multiple occasions. The floor speaker was switched out several times, but the Bluetooth connection problems persisted throughout the evening, making it impossible for anyone in the audience to hear all that was being said,” the letter stated. “Also, even when the Bluetooth microphone was functioning properly, people sitting in the bleachers at either end of the gym floor had difficulty hearing all that was being said.”

It also complains that the way the video monitors were set up, many in the crowd could not see them and that the text used on most were too small to be read.

Plus, it said the experts went over their eluted time and “talked over the heads” of the audience, with in-depth technical information.

Another complaint was the lack of a moderator. 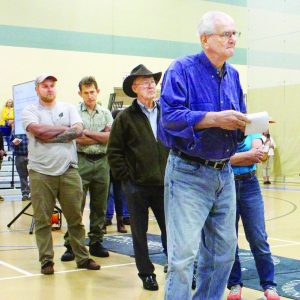 James Heisler, the first of some dozen citizens who got in line to question Nexgen Silica and Department of Natural Resources personnel at the May 19 meeting, gets ready to speak. (Photo by MICHAEL BOYD JR./Herald staff)

Speakers who stood in line asked as many questions as they wished,including one who made personal accusations against Roger Faulkner, one of the Nexgen Silica Partners.