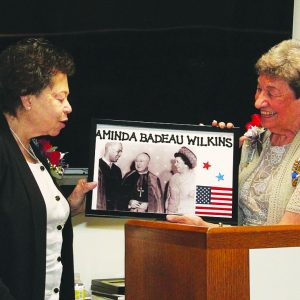 Judy Belford of the Ste. Genevieve Settlement Chapter of the Daughters of the American Revolution (right) presents a plaque to Dr. Grace Young, honoring Young’s great-aunt, the late Aminda Badeu Wilkins on May 14. (Photo by MARK EVANS/Herald staff) 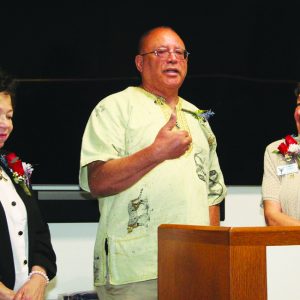 Edward Young speaks during the ceremony honoring his great-aunt, the late Aminda Badeu Wilkins. With him are his sister, Dr. Grace Young (left) and Judy Belford of the Ste. Genevieve Settlement Chapter of the Daughters of the American Revolution. (Photo by MARK EVANS/Herald staff)

Aminda Badeau Wilkins may be gone, but she is not forgotten. The same can be said for her great-grandfather, Michael Badeau.

The May 14 event, at the Center For Colonial Life, featured some important guests. In addition to members of the Old Town Fenton DAR chapter, it included two descendants of Badeau and Wilkins.

Some genealogical research led to the discovery that Aminda Wilkins was Badeau’s great-granddaughter.

Genealogist and DAR member Judy Belford said that two years before, local historian Bob Mueller had told her a grant had been received to abstract colonial era baptismal records.

“Boy, did I jump on that,” Belford said.

In going through the records, she noted a name she had not been familiar with began “jumping out at me.”

“It was intriguing, also because this gentleman baptized his sons with very musical names,” Belford said, “like Adrian Stanislaus, Louis Gonzaga and Israel. It was interesting. As I went on, I noticed that this gentleman started being a godfather to people of color.”

The person she referenced was Michael (or Michel) Badeau, a leading local carpenter.

“When his first wife died and we looked at the burial record, the most powerful men in Ste. Genevieve witnessed it,” Belford said. They also witnessed his second marriage and many were godparents to his children.

“Being intrigued, I went out and started a family tree for him because I wanted to see where this family went,” Belford said. “I discovered Aminda.”

Aminda Badeau, know to her family as “Minnie,” was born in 1905 in St. Louis. She graduated   from the University of Chicago and became a social worker in Jackson County, Missouri. In 1929 she married Roy Wilkins, who would go on to gain fame as long-time leader of the NAACP.

President Lyndon B. Johnson named her to the National Advisory Council on Education and Continuing Education. She was a charter member of the National Association of Social Workers and served on the board of the National Interracial Council and a national nursing home board.

“Can you imagine the accomplishments of this woman?” Belford asked.

“The thing that I feel very proud of is that, all of her life, she tried to help the downtrodden,” Grace Young said. “I’m sure that was a value she carried over from the Badeaus.”