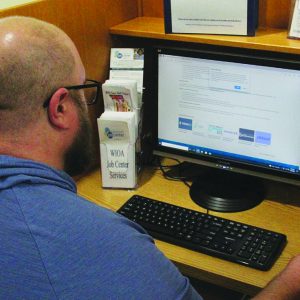 Shawn Long, executive director of the Ste. Genevieve County Library, demonstrates the new Workforce computer the library has ready for any job seekers or anyone wishing to improve their resume or job skills. (Photo by MARK EVANS/Herald staff)

Job seekers or those interested in preparing themselves for a career upgrade now have a place to go.

The Southeast Missouri Workforce Development launched a plan to put job-related computers in communities throughout the region. Most have been implemented through the University of Missouri Extension offices.

The Ste. Genevieve County Commission, however, was concerned that the local extension office, which is taking a leadership role in getting the new county fair board off the ground, had too many things on its plate to take on another responsibility.

So, they turned to Shawn Long, the library director and brought up the idea of having such a setup at the library.

Long was able to set things up without any huge expenses, using some equipment and furniture that was already on hand.

“This is repurposed; this is furniture that is already here,” he said. “I did spring for a Nook computer, but we had everything else here to utilize. Then, the jobs center brought the booklet as well as the headset and the webcam. The whole goal of it was to offer another asset to the community without burdening anybody, as far as the finances go.”

The computer has several job-related software programs and links to pertinent websites on it, including tutor.com, job search researches, as well as a local job bank, tied into Indeed.com, and a site for state job listings.

“We also have a webcam and a head set, so if they ever have to have an interview for a job or with someone from the job center, they can do that from here as well,” Long said. “It’s all self-encompassing, it’s all self-service. You don’t have to have a library card to use this. All the patron has to do is come in and say, ‘I want to use the job resource computer.’ And we’ll give them the number, the code that will unlock it. It’s tethered to our printer, so if they develop a resume, they can print them out.”

“We wanted to make it easier for people who are looking for jobs,” Presiding Commissioner Garry Nelson said. “This way, they won’t have to go to Park Hills or go to Cape Girardeau to do it.”

Nelson has long been an advocate for Workforce Development, which also offers money to businesses who take on new employees, among its offerings.

“We were already overburdening our university Extension office,” Nelson said. “We thought the library would be a good fit. We knew Shawn Long would do a great job running the program.”

Long hopes people will be eager to use the computer, once they know about it. It has been set up since early May.

“We’re still working on trying to get the word out,” Long said, noting that this is an issue with other library programs as well.

“The thing that’s been the toughest for us as far as everything the library’s been doing has just been informing people,” he said.

“We still get a lot of people who come in and say, ‘I didn’t know you guys had DVDs,’” Long said. “We’ve been doing DVDs for four or five years, now.”

The computer offers a central spot to come for job-related items.

“My goal is to have it to where people can come and there’s one location for everything,” Long said. “Not only are you working on fulfilling your unemployment obligations, but while you’re here, maybe you can tweak your resume – or build a new resume. We charge 10 cents a copy, so it’s not going to break the bank to do that.”

For those who don’t have an impressive resumed that merely needs updating or tweaking, the software offers some easy alternatives.