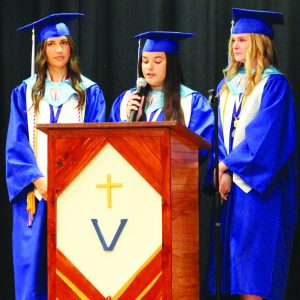 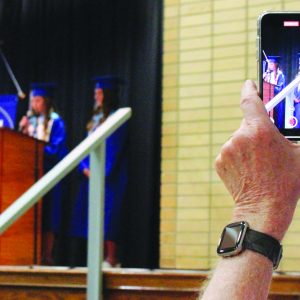 Valle Catholic High School held its graduation ceremony for the Class 2022 on May 12. Valle saw 26 graduates walk the aisle to celebrate one of life’s greatest achievements. In all they had two valedictorians and three salutatorians at the top of the class. The Valedictorians were Mia Weiler and Samanth Loida. The salutatorians were Camryn Basler, Reese Metzger and Abigail Marzuco.  Father Edward Nemeth also spoke at the ceremony. Above, a guest captures one of the speakers on a smart phone. The ceremony was forced to break from tradition as it was held at the VCHS gymnasium instead of the Church of Ste.Genevieve, which was under repairs.