FacebookTwitterLinkedinEmail
| logout
As of late Wednesday morning, law enforcement personnel had not yet found the suspect who allegedly fired at them during a tense scene on Highway 32 Tuesday evening.
Jason Schott, chief deputy of the Ste. Genevieve County Sheriff’s Office, said that law enforcement know the individual’s identity and will eventually bring him into custody.
Highway 32 was blocked for some two hours Tuesday evening, due to the situation. 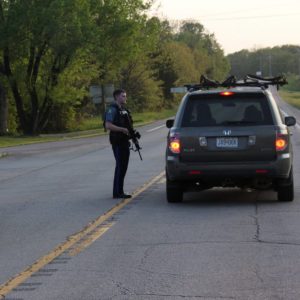 An armed Highway Patrol trooper talks to a motorist on Highway 32 Tuesday evening.