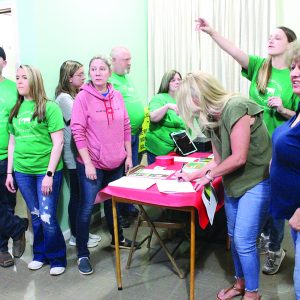 Attendees sign a petition to stop the proposed silica sand mine following the April 30 meeting in Weingarten. (Photo by MICHAEL BOYD JR./Herald staff)

Officials expect a large turnout at the May 19 Missouri Department of Natural Resources (DNR) public meeting.

The meeting begins at 7 p.m., at the Progress Sports Complex on the grounds of the Ste. Genevieve County Community Center.

The public will get a chance to express views on the proposed silica sand mining operation Nexgen Silica, LLC is hoping to open in northern Ste. Genevieve County.

Opposition has quickly risen, with a group, Operation Sand, LLC being formed to fight the mine.

A large crowd attended an informational meeting in weingarten April 30.

At that meeting, held at the Our Lady Help of Christians Church, attorney Steve Jeffery outlined potential dangers the operation could present. So did Dr. Kim Gordon of The Friends Of Hawn, a non-profit group that supports the nearby Hawn State Park.

Jeffery, whose office is in Chesterfield, also addressed the Ste. Genevieve County Commission, along with several concerned residents who live near the proposed location. Jeffery argued that the commission and county health departments do have legal authority to enact mandates to protect the public health.

County commissioners have long argued that the contradictory wording of Revised Missouri Statute 192.300 does not give them such power. The county’s attorney,Ivan Schraeder, has backed this opinion in the past.

The speakers on April 30 addressed potential air quality and water quality issues, as well as water quantity. (There is fear the 6,000 gallons per minute required to wash the sand could dry up wells in the area.)

Other concerns like truck and train traffic, blasting noise and vibrations and long-term health effects were all laid out.