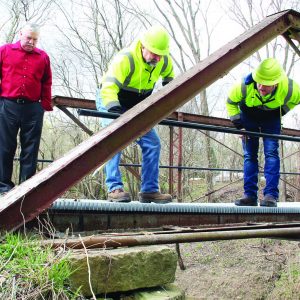 Ed Hess, Southeast Region bridge engineer for the Missouri Department of Transportation (MoDOT) (center) examines a truss on the 102-year-old Franklin Bridge, along with Presiding Commissioner Garry Nelson and MoDOT’s Jarrod Jernigan. Additional problems have been discovered since this April 7 inspection. (Photo by MARK EVANS/Herald staff)

Just when repairs to the Franklin Bridge looked easily doable, another setback has hit the old structure.

The 102-year-old bridge has slid off its support beams and a ring wall on one end is cracked. The Ste. Genevieve County Commission shut the bridge down when informed.

Chris Crocker of the Missouri Department of Transportation (MoDOT) along with Jeremy Manning of Smith & Company Engineering and Keith Simpson of Keith Simpson Contacting examined the bridge and have a plan of action lined out. Manning is the county’s go-to engineer, Smith & Company having served as advisor to several past projects. Simpson, meanwhile, put in the new bridge over Saline Creek in Minnith.

Presiding Commissioner Garry Nelson said that Crocker had expressed appreciation that the county had been “proactive,” shutting the bridge down and immediately notifying him.

Simpson will rehab the bridge according to engineering drawings. Being an emergency and requiring special skills and experience, the commission does not have to put the job out for bid.

The commissioners have been a bit frustrated lately that MoDOT wants the Southeast Missouri Transportation Advisory Council (TAC) to have counties submit a list of new roadwork priorities.

The rub is that very few of the priority projects turned in over the past several years have gotten off the ground. That MoDOT is requesting fresh ideas, rather than revisiting past submissions has the commissioners figuratively scratching their heads.

In recent years, the county has suggested stoplights at Highway 32 and 55, adding elevation to Highway 32 to avoid flooding at Kiefer Flats, adding a turn lane at US 61 and Industrial River Road, and keeping big trucks from cutting through Bloomsdale and routes OO and DD.

The Industrial-61 turn lane is the only one that took root. It has supposedly been added to the MoDOT construction schedule and may be on the calendar for 2024 or so.

Some discussion took place on a “new” idea. The commissioners actually turned to one that had been brought up five years ago, adding a turn lane at the Mississippi Lime entrances on Highway 61 and Market Street.

It could essentially go from Lime Kiln Road to Market Street.

David Bova, community development administrator for the city of Ste. Genevieve, noted that if the city expands Maple Street, traffic in that area “will become a real problem” without such a lane addition.