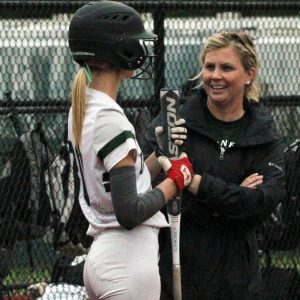 First year Dragons head coach Rebecca Keim has her team in the district championship game, breaking the school record for wins (18) in a season in the process. (Photo by MICHAEL BOYD JR./Herald staff)

The Ste. Genevieve Dragons softball team reached the MSHSAA Class 2 District 3 championship game by upsetting the top-seeded Potosi Trojans 4-1 today in the semifinals at Potosi.
In her first year as head coach, Rebecca Keim has the Dragons at 18-7, thus setting a new school record for total wins in a season.
The fourth-seeded Dragons now will face third-seeded Park Hills Central Rebels (13-3) at 4:30 p.m. tomorrow (Tuesday, May 10) at the Potosi Recreational Complex.
Central beat second-seeded West County Bulldogs 6-0 in the other semifinal. West County and Potosi are finished for the season.
Posted in Sports