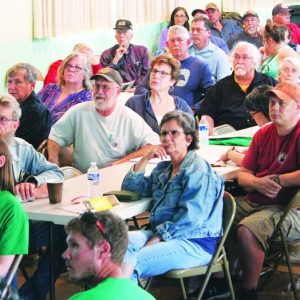 The meeting, held a the Our Lady Help of Christians Church in Weingarten, was to get information spread and support built up to oppose a silica sand mining operation proposed by Nexgen Silica in northern Ste. Genevieve County.

The recently-organized Operation Sand had various hand-outs available and was even selling T-shirts opposing the sand mine.

Jeffrey, of Jeffrey Law Group, LLC, of Chesterfield, who had been chief counsel at the Missouri Department of Natural Resources under Governor John Ashcroft, 1987-1993, laid out public health concerns about the quartz-based silica sand and also went over legal issues.

He cited several studies made between 1980 and 2017 that outlined its danger to air quality. He compared the microscopic silica sand particles to tiny shards of glass.

It was later noted that, unlike beach sand or other types of sand on the surface, this sand has never been exposed to natural weathering or erosion. Therefore the edges of each particle remain sharp and pointy.

Jeffery cited studies that said the particles easily become airborne and can go up to half a mile from the edge of the mining property line. (See County Commission story for more details.)

He also argued that the types of soil in the area of the proposed mine are the types that generate a lot of water run-off. This threatens water supplies, he said.

“When you mess with the water table, you’re messing with a lot of things,” Gordon said. He predicted that in the future, clean water may be “more precious than sand.”

Gordon stressed that no answers have been received on how the project might affect the water shed for the region.

He argued that tampering with the water table would “impact Ste. Genevieve for generations to come” and that “We don’t know a thing” as to what the impact of the operation could be.

Nemec argued that there is too much unknown abouit possible future health effects.

“You’ve got to think: What’s more important? The money or your children’s health?” Nemec said. “Do you want to see them 30 years old and have lung problems? That’s a long ways away, but it happened with asbestos and with other things we had o idea that it was going to be a problem.”