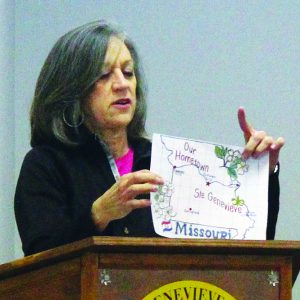 Ste. Genevieve City Hall will have a new look in the future.

The board of aldermen met with local mural artist Joy French regarding a mural she wants to paint on the north wall of the building, during a work session last Thursday evening.

French, who created and painted the mural on the union hall at N. Fourth and Market streets and brought back to life the “ghosted” circa 1900 painted billboard on the side of the Anvil, was present to answer questions about the project. She also showed a drawing of what the mural would look like. It would be the shape of Missouri, with Ste. Genevieve and major cities marked “just as points of reference.” Ste. Genevieve would be marked by a fleur de lis.

French asked for about $350-375 for materials and for the use of a lift device.

Ward 2 alderman Bob Donovan asked about the mural’s lifespan, French replied that with modern paints, it should easily last 20 years.

City Administrator Happy Welch asked if she bought paint off the shelves. French replied that she uses oil-based enamel paint. She also sues a prier and a sealant.

Ward 4 Alderman Joe Prince mentioned that there had been talk of powerwashing the building again and “possibly sealing it and putting a nicer color on the brick eventually.”

He suggested this be looked into before the mural is painted.

“We’re making all these improvement inside” Prince said. “Eventually, we’re going to have to address the aesthetics of the outside.”

He stressed that he was not opposed to the mural, but felt the other work needed to be done first.