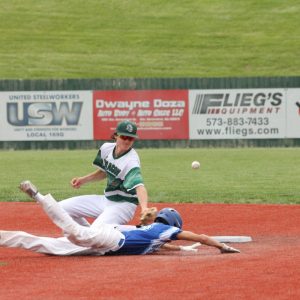 Ste. Genevieve’s Aiden Meyer tries to snag a low throw from his catcher as Valle Catholic’s Nathan Schwent is just shy of reaching second base during a successful steal attempt during the Warriors 3-0 win in the annual Old Settlement Showdown between the crosstown rivals. (Photo by MICHAEL BOYD JR./Herald staff) 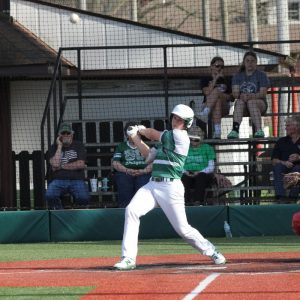 Sophomore Mason Nix was a home run shy of hitting for the cycle as he and Aiden Boyer provided most of Ste. Genevieve’s offense in a 9-4 loss to St. Pius X Friday in Festus.

The Dragons outhit the Class 3 No. 2-ranked Lancers 12-7, but they stranded eight runners and struck out eight times offensively, and committed five errors in the field to suffer their third loss in four games, including two straight  –  both to Catholic schools.

Ste. Genevieve (11-7) managed only one run in each of the first, third, fourth and fifth innings.

Pius (11-6) snapped a two-game skid taking a 2-1 lead in the bottom of the first frame. They added a run in the second, then plated two more in each of the third, fifth and sixth and held on from there.

For more, see the Herald’s May 4 printed edition.