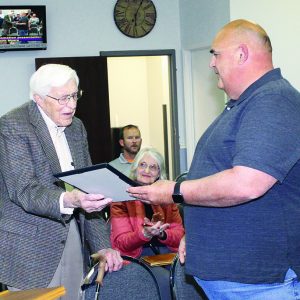 Frank Myers’ years of service to the local community were honored at last Thursday’s Ste. Genevieve Board of Aldermen meeting.

Mayor Paul Hassler presented a framed certificate to Myers at the start of the meeting.

The certificate highlighted many of Myers’ achievements in Ste. Genevieve, beginning with his restoration of the historic Josiah Millard House1981, when he moved his family here. It noted that he has “worked to preserve, protect and restore several buildings in Ste. Genevieve.”

Myers, who was on the original Landmarks Committee in the 1980s, had remained on its successor, the Heritage Commission, until this spring, when he stepped down at age 93. He was also a board member for Levee District No. 3 for many years, after helping fight for the constriction of the Urban Design Levee.

He also helped bring about new sidewalks and street lighting downtown and construction of the Welcome Center. He has also served as an alderman and as a member of the Planning and Zoning Commission.

The certificate noted that he also “played a large part” in bringing a national park to Ste. Genevieve.

It recognized Myers “for his dedicated and many years of service to the city of Ste. Genevieve and the preservation of our historic community.”

Myers, who retired here after 27 years as a Air Force officer, in which he raised his family on three continents, expressed gratitude for the recognition.

“I appreciate very much the thanks that you have given me,” he said, “but I also wanted to say that that’s a two-way street.

“The thanks go from me to the community … we appreciated our life here,” he said. “We raised our children here. They all graduated from schools here. It’s just been a great situation where.

He expressed appreciation for being welcomed into the community and for the help hundreds of sandbaggers gave in saving his home from rising flood waters in 1993.

WALKING TRAIL MAY BE CHANGED

During the Committee Reports segment of the meting, ward 4 Alderwoman Ashley Armbruster, who is liaison to the Park Board, reported that the group is looking to change the Valle Springs Park walking trail.

It is now much, in between rocks, which demands considerable upkeep and is still not an ideal surface. She said the Park Board is looking at a fine, crushed rock surface that will still be Americans with Disabilities Act (ADA)-compliant.